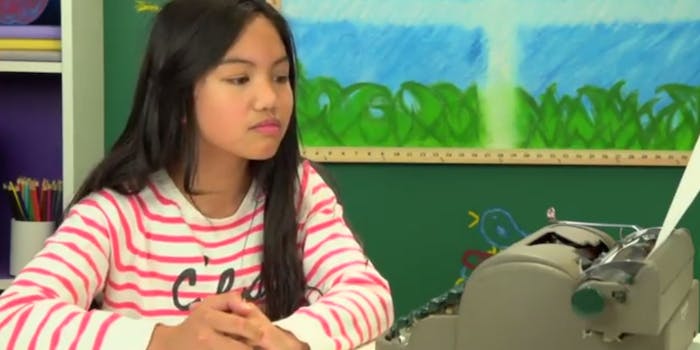 Kids reacting to a typewriter will make you feel old

"This is scary," one of them confesses.

The Fine Bros. are back with yet another round of today’s children interacting—or at least attempting to do so—with yesterday’s technology. This time, the youngsters, fresh off of their introductions to rotary phones and the Game Boy, focus on a typewriter.

When the clunky machine is placed in front of the kids, many of them look at it with wide-eyed confusion and wonder, as the device is quite larger than the tablets, smartphones, and laptops they’re used to. A few of the older children recognize it from “old movies.”

“This is scary,” one of them confesses.

Throughout the course of the YouTube video, the kids are shown how to load paper, access the next line of text, and even what to do in the case of a mistake. Many of them enjoy that comforting “clacking” of the keys (a rare sound these days), none are impressed with its limited capabilities and numerous steps required to produce a flawless document.

“It looks really ancient. I feel so fancy,” one of the young girls says wistfully.

While today’s typing devices may be faster and more efficient, today’s kids will never be able to appreciate some of the classic moments that could only be accomplished with typewriters, such as the Stephen J. Cannell Productions logo, which appeared at the conclusion of TV programs like The A-Team and 21 Jump Street.