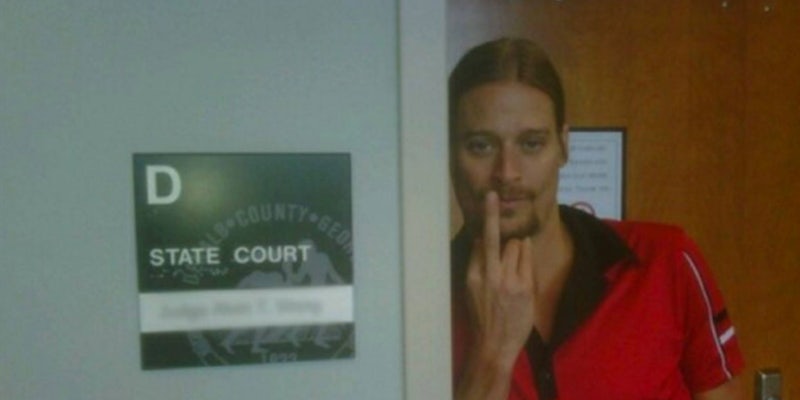 ‘Hey, authority’ meme is the only good thing Kid Rock has done in years or ever

Authority, the concept that has controlled Western society for thousands of years, died this week after being viciously roasted by Kid Rock, a 45-year-old father of one.

Rock, a cowboy and/or outlaw who loves America (or it least its formerly Confederate states) but feels no particular eros for its criminal justice system, tweeted a photo from outside a state courtroom this week, flipping off the camera like a petulant first-grader.

He captioned it “Hey, authority.”

Authority could perhaps have weathered the onslaught if it had only come from a middle-aged rap-country icon, but Rock’s bold and unironic act was just the beginning of a revolution. It was the most, stirring, effective act of revolt by a rich, white American man since the founding of Green Day all those decades ago.

For so many on Twitter, Rock’s sentiment resonated. The time to smash existing power structures was nigh:

In the face of such passionate opposition, even authority had to concede that Kid Rock was probably right—he is a radical philosopher whose time has come. Rock had tapped into an undercurrent, a silent majority, a mass of middle fingers waiting to rise and speak as one. They were definitely not mocking the sight of a washed-up, middle-aged entertainer who appeared to be cosplaying “The Jesus” from The Big Lebowski as he rejected the jurisdiction of a court he obligingly showed up for.

No way. If they were making fun of him, Kid would have kicked their asses by now.

So yeah, the FB comment thread on that "hey authority" pic is a treasure trove. https://t.co/2ULdXhM1si pic.twitter.com/UMDEZ9GtYj

Life without authority is expected to be chill, and mainly centered around domestic lite beers. Certainly, as members of the proletariat, we’ll all be happy to have more baw with the baw(??), one of Rock’s primary demands during his years as a radical campaigner.