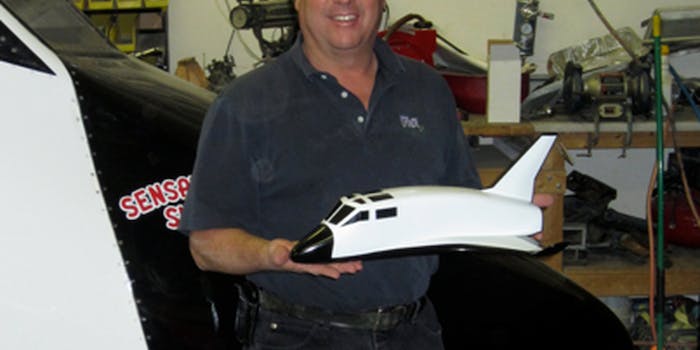 Can Kickstarter put a man in space?

Space tourism is all the rage, and Star Systems thinks that Kickstarter can help it get in the game.

Kickstarter has taken on comic publishing and video games. Now popular crowdfunding site for start ups is trying to send people into space. But has a Kickstarter project finally gone too far?

Four men in Arizona want to send their homemade Hermes Spacecraft into orbit. Financially, it’s still a far cry from Double Fine Adventure and The Order of the Stick, but the ultimate dream is much bigger. On Reddit, skeptics believe it has the potential to turn into a nightmare; they are calling the ship’s prototype a “deathtrap.”

Under the leadership of founder Morris Jarvis, Space Transport and Recovery Systems (Star Systems) has spent the past 34 years prototyping a spacecraft it hopes will one day evolve into a privately run space travel enterprise. The Hermes will provide passengers with “the ultimate joyride, a thrilling ride to space where passengers can experience zero gravity, see the curvature of the Earth below and the star-filled black sky above.”

The next step in the journey, according to Jarvis and company, is to rig the Hermes Spacecraft with a new, 10-inch diameter motor, one that can handle the necessary 5,000 pounds of thrust the ship requires to take flight.

On March 28, the company started a Kickstarter campaign to raise the $20,000 necessary to build and test that motor. Thanks to reward offerings that include handcrafted Hermes model ships, Hermes T-shirts, and rocket-engine paper weights, the group has raised $3,000 from 90 different backers in less than a week. They’re feeling good about the prospects of sending their Hermes Spacecraft into suborbital flight.

Not everybody who has come across the campaign has seemed so confident, however.

On Sunday, one skeptical engineer brought the Star Systems’s campaign to Reddit subsection r/space, where redditors have been quick to dispel the notion that the Hermes Spacecraft is equipped for suborbital launch.

“As an engineer, that thing looks terrifying,” wrote redditor Pulsar391 before picking through a number of the Hermes Spacecraft’s shortcomings.

If you look carefully at the ship, the black section of the body isn’t heat shielding, it’s just black. Windows with sharp corners are nice for lamborghinis, but terrible for containing pressure and are very structurally weak. There’s a gap between the body and the adjacent control surface which would expose the side of the craft to extreme temperatures on re-entry. If the craft they show in their videos is just a mockup then there’s no problem, but I seriously hope they don’t try to fly that thing.

“I would not ride to space in that thing,” getthejpeg wrote. “And I really want to go.”

“Didn’t a bunch of airplanes disintegrate in midair for having square windows like that?” asked TheEphemeric.

Star Systems program manager Mark Longanbach came to the spacecraft’s defense on Monday, clarifying that the vehicle in the Kickstarter video is a prototype, prepared for flight but certainly not equipped for space travel.

“The prototype is made of aircraft composite skins with chrome-moly steel,” Longanbach wrote. He continued:

This makes the craft much heaver and not as robust, but, its significantly cheaper than space rated materials.

The reason the prototype was built in the first place is, when Morris Jarvis went to seek funding several years ago, he made no progress because he had no prototype. The decision was then made to create a near-full scale replica of what the vehicle would look like.

Longanbach promised pressurized windows, aluminum framing in certain areas, and a rounded body—three areas of serious concern to redditors. But his claims did little to settle the cynical crowd.

“It looks more like a prop from a well funded school play or a cheap theme park rather than a real spaceship,” quipped Burkitt.