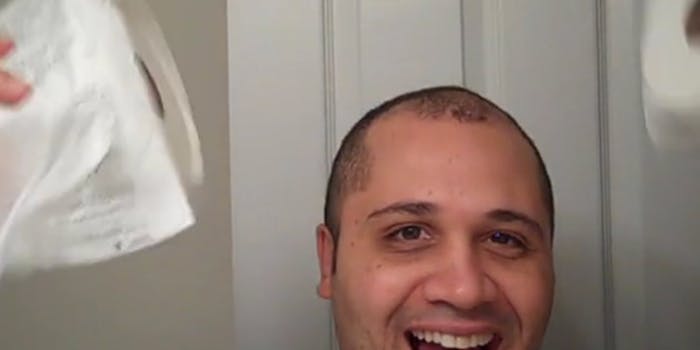 Wipe away SOPA and PIPA with new toilet paper

A new Kickstarter project hopes to print the reviled legislation on toilet paper and flush it down the tubes.

An Arlington, Va., man thinks so little of the recently shelved Stop Online Piracy Act (SOPA) and Protect IP Act (PIPA) that he wants to use the bills to wipe his you-know-what.

Craig R. (who has withheld his last name from interviews) is in the final days of raising funds for the Kickstarter project “Print the SOPA and PIPA bills on Toilet Paper,” a project that, if he can raise $2,000, will allow him to print the two congressional proposals on rolls of toilet paper and set up distribution.

“SOPA/PIPA on TP (toilet paper) is a gag outrage item that offers users a chance to express themselves regarding these two proposed bills in untold new ways,” Craig wrote on the project’s homepage. “Let SOPA PIPA finally have some practical use for once. Share it with your friends. share it with your family. Or share it with your local representative!”

The SOPA and PIPA acts came to the forefront of the Internet rights conversation in January, with many website choosing to go dark to protest the legislation, which critics claimed would threaten free speech on the Web. The bills were shelved later that month, though public conversation about the two acts has continued.

With only $400 raised, the project seems destined to fall short of its $2,000 goal, though Craig has tried to rev up funding by offering backers the chance to include their own messages on the rolls.

“[Backer messages] will be pasted at the end of the SOPA or PIPA bill text… so that you can read what others have posted regarding SOPA, PIPA, [or] their opinion of our legislation” he wrote. “It’s a paper based discussion board that feels great between your fingers!”

Regardless of whether or not Craig reaches his goal, this project is going to get flushed down the toilet.