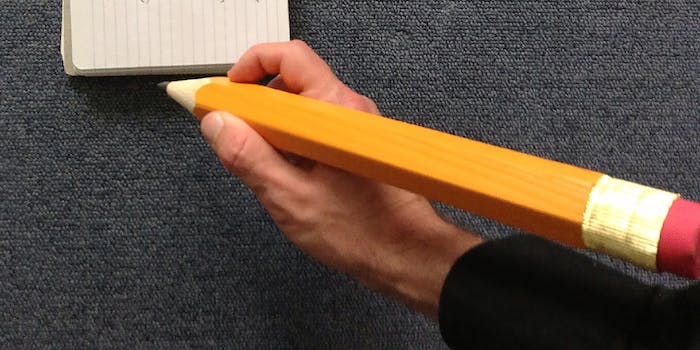 We all have dreams. This is Alex Wong's.

Some men build bridges. Others write epic novels. Alex Wong draws dicks. And now, he wants $100 to draw the world’s biggest one.

A self-described unemployed recent college graduate from Seattle, Wong is the creator of a Kickstarter for the World’s Biggest Dick Drawing (WBDD), a 100-inch drawing of—what else?—a phallus. He’s doing this, he says, not as part of an elaborate performance art project, or as a subtle commentary on society’s obsession with the powerful male phallus. He’s doing it because he just really, really likes drawing dicks.

“Whether it is a terrible sketch on a bar napkin or a beautiful painting on a canvas; a dick drawing is a dick drawing,” Wong writes on his Kickstarter page. “Seeing an abstract dick by Picasso in a museum is just as funny as drawing one for yourself in the condensation of a car window.”

But why, exactly, would someone devote an entire Kickstarter project to drawing a giant dick? To find out, the Daily Dot reached out to Wong with some long and hard questions about his long and hard dick drawing. He provided some insight into the motivation behind his project, exactly how big his dream dick drawing would be (he’s aiming for 10,000 inches), and the $64,000 question: Will the World’s Biggest Dick Drawing be circumcised?

So how’d you get the idea to crowdfund the world’s biggest dick drawing?

The idea came to me one night in the shower. My shower has a tiny window that gets fogged up really fast when I’m in there and naturally the first thing I draw into the condensation is a huge dick. I’ve always done this since I was a young kid. It probably started on paper and then moved to other things like school books and the occasional graffiti. When I was in the shower last I figured there were millions of guys (possibly girls) who did the exact same thing. I was inspired by the fact there would be like-minded people who would want to see this come to fruition. I wanted to take it from a personal passion to a universal monument—hence the Kickstarter (recently dubbed “Dickstarter”).

Drawing dicks was always a childhood past time and I think the simple things tend to stay in your life and always make you smile. It’d never have crude intentions for me because I’d draw them whether a group of people would see it or just for myself. Like I said, when I was little it probably started on paper, in the shower, or on books and desks. That continued through adulthood and there’s never a moist window that will go without a dick drawing around me. When I’m waiting for my food at a restaurant I constantly draw dicks on the condensation of my water glass. You have no idea how many friends’ cars have finger stains of dicks on their windows after they’ve dried.

Vaginas are always a trickier art piece. I’ve always felt like they’ve needed an entire set of legs around them or a belly button above to truly identify them for what they are, but dicks have a common branding and it’ll never be misconstrued or mistaken for something else. Giant spaceship? Well, let’s just say I’m waiting on the real thing. A giant dick? Hard to come by nowadays.

Tell me a little bit about the logistics of the project: What medium do you plan to use? How do you plan to draw this, and where will have the space to you display/store it, should you meet your goal?

If the goal is met, I plan to use high quality printing paper to get the dick drawn on. That means we’d probably be working with dimensions of 8.5×11 and I’d plan accordingly to that. Someone asked me about girth, and I replied by saying the width would be relative to the length to account for visible veinage. If the goal isn’t met, I’d still love to head out to an abandoned road or anything that is straight for quite a while, and either do a huge chalk dick or maybe one of those spray paint dicks with a surveying spray can that sprays while upside down. The paper medium would work the best because it would be mobile and convenient, as well as a product that could be sold, auctioned, or donated after the project.

I don’t think the Guinness Book of World Records actually has a record for largest drawing of a penis. [Ed: It does not]. How’d you decide on 100 inches/100 dollars? Will you add inches to the penis if you exceed your goal?

I doubt Guinness has that record but just from what I’ve seen, I think it would be possible to get inducted. The problem is, I don’t think they’d take it as serious if it was a minuscule drawing when it’s intended to be “The World’s Biggest Dick Drawing” because they seem to want something outstanding. 100 inches is a modest goal and the $100 would be put towards the quality of paper and printing prices, etc.

My dream is to surpass 10,000 inches at least. That’s what is interesting about Kickstarter, as there is no pledge cap once your goal is reached. $100 is to prove I’m serious but not to rob people or make them feel like it’s a scam. If the pledges allow it to be a historical dick drawing, then so be it. I’m in it for the inches and I would love for this thing to be ready to perform when it’s drawn. I’m not aiming for shriveled, I’m shooting for stunning. The pledges can either make this a mediocre dick drawing or one that looks like it’s been drawn by a pen armed with Viagra ink.

What’s your background? Are you an artist or performance artist? Is this a performance art piece? Or is this unrelated to your professional interests?

I’m pretty irrelevant to the project itself. The overall goal is for this to be collaborative and for the product to reflect what the people want and are willing to back.

I had a huge interest in finding out how many people were like me when they were younger and if dick drawings are still in their lives. But, I’m essentially a person with no distinct talents or skills. I have interest in doing many things but have a hard time staying focused, or maybe I just never get to them. Being a novelist is my dream but I hardly write as much as I need to and I read even less.

This project represents more than art and performance art. I don’t see it as a performance because I’m not trying to make a “great statement” and as far as art, dick drawings are probably lowest wrung [sic], bottom tier, something that a hipster wouldn’t even look at and ponder for more than five seconds. I’m okay with that and I believe the project represents people who aren’t too worried about art or changing the world but are instead happy with how things are and can be at the most basic level.

You don’t frame a dick drawing, it isn’t in art museums and hung in wealthy peoples’ homes. They’re in dirty bathrooms and on bar napkins when you’re drunk. They’re on your son’s desk at school and on your friend’s face in Sharpie after he’s blacked out. Let’s leave it at that but take it to another level. It’s not about me, it’s about all of us, and all of us love a good dick drawing.

6) And the question on everyone’s mind: Will the final product be circumcised or uncut?