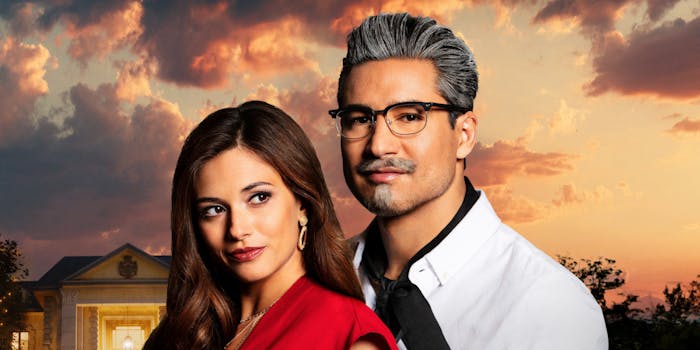 Lifetime made a mini-movie with KFC, and it’s incredibly bizarre

Every so often, you come across something on the internet that, in both initial glance and upon further inspection, you can’t quite believe exists. It’s at least as absurd as a fever dream in the Onion or a half-forgotten final Saturday Night Live sketch—but in this case, it’s absolutely real.

Today, that thing is A Recipe for Seduction, a new Lifetime Channel mini-movie made in conjunction with Kentucky Fried Chicken.

Granted, the idea of Sexy Colonel Sanders isn’t exactly new. KFC has been experimenting on the portrayal of its mascot for a few years, which includes starring in a romance novella, a virtual dating simulator, and a riff on Chippendale dancers. But it’s quite another to be presented with a poster for a real movie featuring a gray-haired Mario Lopez standing next to a woman and the words “Mario Lopez is Colonel Sanders.” The tagline feeds into the title, reading, “We all have our secrets, his just happens to be… A Recipe for Seduction.”

According to a press release announcing the film, A Recipe for Seduction is “the first-of-its-kind 15-minute Lifetime Original Mini-Movie is full of mystery, suspense, deception, ‘fowl’ play and—at the heart of it all—love and fried chicken.” The film—with a runtime amounting to approximately 1.5 Quibis—follows a young heiress who falls in love with a new chef to the dismay of her mother’s plan for her daughter to marry her chosen suitor.

As further proof of this movie’s existence, Lifetime released a trailer for the film. In the span of about 47 seconds, the trailer for A Recipe for Seduction includes (but is not limited to): A jilted proposal, a scheming mother, a woman who is enchanted by a new face, secrets (including a secret recipe), a dead body, a threatening interrogation, and Lopez confirming that his name is Harland Sanders.

“Lifetime is the perfect holiday home to bring this spicy, unexpected tale to life,” David DeSocio, EVP, Ad Sales Marketing & Partnerships, A+E Networks, said in a statement. “Through a terrific cast, and with a wink to the unique sensibilities celebrated in Lifetime movies, this co-production spotlights each brand’s POV and marries them in a fun and authentic way. A+E Networks delivers custom creative that our audiences and clients love.”

Is A Recipe for Seduction nothing more than a supersized advertisement for KFC? Possibly. Is it wild as hell? Yes. But does it also feel like the kind of thing that doubles as a perfectly chaotic way to end 2020? Absolutely.

A Recipe for Seduction debuts on Lifetime on Dec. 13 at 12pm ET/PT.