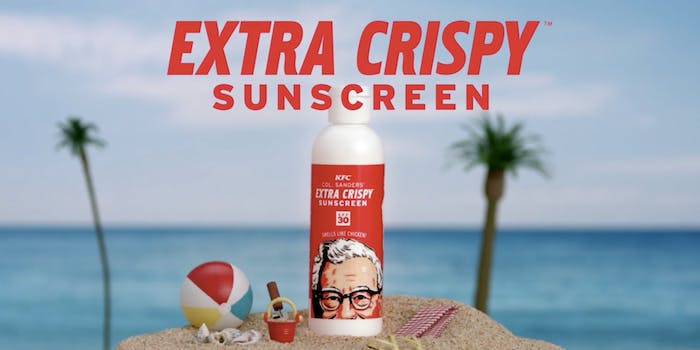 Why must we play god?

If you’re going to roast this summer, at least now you can protect yourself from the sun’s rays while smelling like fried chicken, thanks to Kentucky Fried Chicken‘s latest marketing stunt.

This week, the fast food company unveiled its Extra Crispy Sunscreen. It’s real sunscreen with 30 SPF that apparently also smells just like KFC’s main menu item. Unfortunately (or fortunately, depending on your feelings about such a product), KFC was offering the Extra Crispy Sunscreen for a limited amount of time, and they immediately ran out of supplies.

It’s unclear how authentic this fried chicken smells, since that seems like a scent that’s pretty hard to recreate without a deep fryer. But it is pretty obvious that this was mostly a campaign for KFC to get some buzz.

We’re also wondering whether or not sunscreen that smells like fried chicken is any better than your normal, coconut-scented sunscreen. Maybe dogs will come up to you with the scent of poultry slathered all over you—flies and other bugs would certainly be horrible. Either way, it’s practically an accepted fact that sunscreen is just not going to smell all that good.

As of Tuesday, KFC fans are eagerly awaiting their Extra Crispy Sunscreen. According to its website, it can take up to eight weeks for the package to arrive. But the next time you’re at the beach or pool and get a whiff of fried chicken with no bucket in sight, you’re probably dealing with someone who got their hands on this important novelty product.

Is fried chicken-smelling sunscreen as cool as Nivea’s seagull robot that’ll crap sunblock on you at the beach? Not sure, but they both sound like shitty ideas.