Kevin Ware, owner of one the most gruesome leg injuries in the history of college sports, has quit twitter because of "losers like TMZ."

Kevin Ware, owner of one the most gruesome leg injuries in the history of college sports, has quit Twitter because of “losers like TMZ.”

“This is my last tweet,” he posted. “All the support from fans was well appreciated.”

Ware caught national attention when his right leg split open in a freak accident during the Final Four basketball tournament in March, and the national attention shot made him a Twitter celebrity, skyrocketing to more than 175,000 followers.

He was nodding, apparently, to being approached by a TMZ reporter after Saturday’s White House Correspondents’ Dinner, which Ware attended with his girlfriend. The reporter asked Ware if his injury had slowed his sex life, to which Ware sheepishly grinned and slightly nodded his head no. TMZ ran the headline “Kevin Ware—My Leg Is Broken, but My Sex Life Is Just Fine!”

On the other hand, it appears that loosely enforced Louisville rules state Ware isn’t allowed to use Twitter anyway, as he casually noted: “its a team rule.” And soon after Ware’s injury, teammate Peyton Siva told the Michigan Daily that “We stay away from social media.” 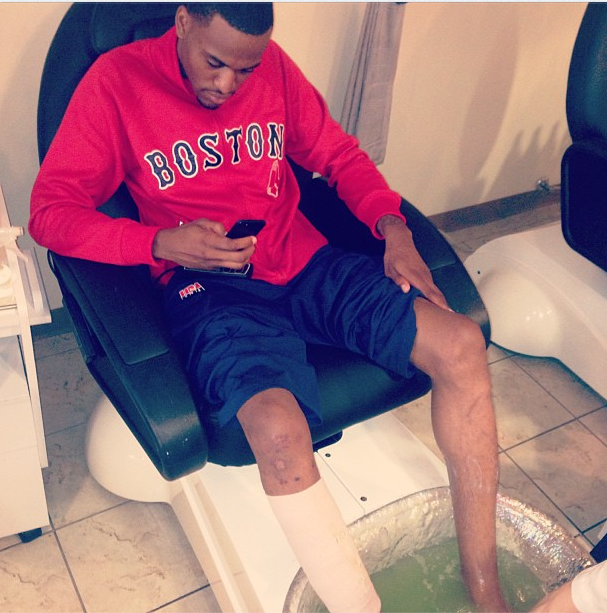 “We don’t Twitter, we do Instagram,” Siva added, “but that’s only because Coach [Pitino] doesn’t know what that is yet. We stay away from a lot of outside things.”

Since the announcement, Ware has updated his Instagram once, with an inspirational athlete quote from Tumblr. It’s unaware if it was intentional, but the move automatically cross-posts to his Twitter account.