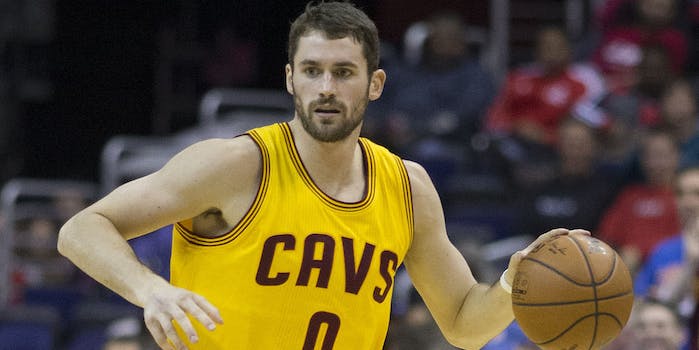 Why did nobody tell me that Kevin Love is hot?

Sitting down with a stack of reheated Domino’s pizza slices and nice cold Bud Light Straw-Ber-Rita, I was about to watch Game 7 of the NBA Finals. Up until Sunday, I was largely tuned out to what was happening in the world of sportsball. But with all the drama from Game 6, I decided it was time to see what was going down. And as a chubby 6th grader, I played center for a community basketball team, so I was well-prepared for this historic occasion—or so I thought.

Because even before the tip-off, my jaw dropped and a cheesy barbecue chicken morsel almost fell from my mouth when I spotted a bearded Adonis in one of those Cleveland hype videos. There was this hot blocking shots, adorned in wine and gold. His name: Kevin Love.

Damn, the guy can even pull off a mustache.

And the Cavs won Sunday night. Woohoo! That’s nice. Good for Kevin. And the rest of his team, too. Don’t even know how Kevin did in the game. But I do know he celebrated like a true champ: with a high-pressure shower of nice cold beer. You deserve it Kevin.