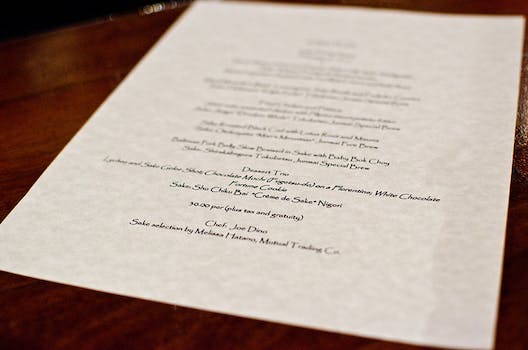 Tasting menus aren't the problem. It's how we consume everything: the Internet has gotten us used to à la carte everything, and there's no turning back.

Food media seems determined to jump from controversy to controversy these days. From the Anthony Bourdain/Paula Deen kerfuffle to the Great Guy Fieri/New York Times Dust-Up of 2012, the flare-ups seem to be coming fast and furious. The cause du jour? Restaurant tasting menus, thanks to a sharp critique in Vanity Fair by Corby Kummer under the headline “Tyranny – It’s What’s for Dinner.” In the article, Kummer takes the position that the modern tasting menu, wherein a chef sends out a multitude of courses at his or her own discretion without input from the diner, is a dictatorial exercise in sadism.

I’ll be blunt: The tasting menu isn’t the problem. The problem is the way we consume just about anything these days.

Restaurant tasting menus are not for the layperson. This past weekend, I was lucky enough to enjoy twenty-one courses at SAAM, the semi-private chef’s tasting room of José Andres at the SLS Hotel in Beverly Hills. This was a beautiful, extravagant affair and the only choice I got to make was what I wanted to drink. Instead of poring over the menu and constructing my own meal, my palate was entirely in the chef’s hands.

Left to my own devices, I never would have ordered the Japanese baby peaches with Burrata or the langoustine on top of crispy chicken skin. I most likely would have missed the Parmesan macaron that may in fact be one of best things I’ll eat all year. That’s the beauty of the tasting menu: amidst the authoritarian structure lie surprises that you would otherwise have missed if left to your own volition. Kummer, though, equates the tasting menu experience to a form of gustatory torture: “…The diner is essentially strapped into a chair and expected to be enraptured for a minimum of three and often four and five hours, and to consume dozens of dishes.” This isn’t the chef’s fault. If you don’t want the tasting menu, don’t order the tasting menu. If the restaurant only serves tasting menus, don’t go to the restaurant.

At the core, though, I don’t think the issue is about the type of menu that’s being served. I think it’s the fact that we’ve become too accustomed to our own enfranchisement—thanks to an Internet that has trained us to love the à la carte option.

In fact, if you think about it, we’ve consumed just about everything on the tasting menu plan for decades now. Newspapers decided which news was worthy to share with us. Television channels chose when to show us which programs. Schools created specific curricula to teach students what they deemed important. It’s only been since the widespread adoption of the Internet—and the cornucopia of choice that it offers us—that we’ve shifted to a more pick-and-choose philosophy. The way we want to consume in the outside world has become a reflection of how we consume in the online world.

If you go shopping, do you go to one website and accept that what you see is all that’s available? No, you go all over the web for what you want, to find the best style at the best price. The days of going to a store and accepting their inventory (or their sale) is long gone.

Same goes for music. Back in the olden days, we used to listen to the radio. What the DJ played is what we heard. If you didn’t like it, you could turn it off or wait until the next song. And if you did like it, and wanted to record it, you’d have to listen to your radio station for hours until the desired song happened to be played, rush to your boom box, and hit record, hoping to record at least the majority of said song.

Now, our music enjoyment is driven by exactly what we want to hear, when we want to hear it. We have vast libraries of MP3s on our home computers. We have Spotify and their seemingly endless catalog of tracks. The decision-making power has shifted entirely to us—and when that power is gone, as the Vanity Fair article laments, it makes us mad.

The Internet is by its very nature a wild Choose-Your-Own-Adventure. We live in a Reddit world, where news and links and GIFs and anything else is crowd-sourced, and it’s incumbent upon you to choose what you want to read. The days of the Drudge Report—where one person decides what’s important—is pretty much over. Content curation has been left in the hands of the masses.

We create our daily experience based on all of the options presented to us. We go from an article about the Lakers team chemistry to a video of a puppy learning to walk down stairs to a list of foods you can microwave in a mug. We self-curate now more than ever. Does that mean it’s the best way? Personally, I don’t think so. I don’t like the onus always being on me. I don’t like having to construct everything from scratch. Sometimes I wish there was a daily syllabus for Web consumption. It bums me out to have to know what I want to listen to all the time. I’m just not good enough at knowing the whole spectrum of music to make that experience satisfying.

As it turns out, there is actually a model that bridges the gap between tasting menus and the a la carte Internet. The best examples come from music Apps like Pandora and Songza help us overcome the boredom of our own choices. I know where I want to start (“A Weekday Dance Party” or a station based on both Arcade Fire and Regina Spektor), and I let them figure out the rest. In restaurant terms, it would be the equivalent of choosing two courses and telling the chef to cook four more based on what you’ve already ordered – something of a personalized tasting menu, if you will. Which, if you ask me, would be a damn good idea.

That middle ground should be where our consumption is headed, be it online or in the real world. We set the starting point and the professionals fill in the rest. That way, we have both the freedom of choice and the benefit of expert knowledge all wrapped into a single package.

Now if only we could get that kind of user-informed content curation in the dining room of your favorite restaurant.