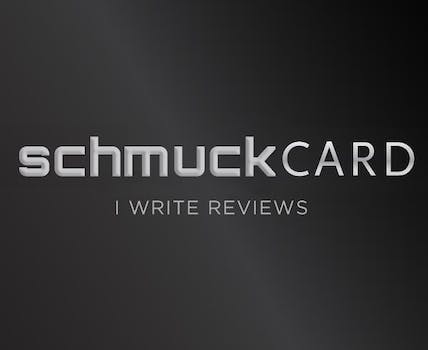 ReviewerCard: The ethics of being a schmuck

The Prolific Online Reviewer is a special species of vermin. They falsely believe that not only are all their opinions valid, but that they are actually worthy of being read by everyone else.

Luckily, for the most part we suffer these fools only in the online sphere—until now. They’ve been unleashed, probably coming soon to a restaurant near you, with a new product called ReviewerCard. The species has mutated. The Perpetual Online Reviewer is trying to gain credibility in the real world and the real world is not happy about it.

What exactly is ReviewerCard? It’s a $100 piece of plastic. It has your name on it. It has a number on it (you know, to look official and stuff). It says “REVIEWERCARD” on it. It also says “I write reviews.” That’s it. That’s all it is, created by one dental marketing executive (?!) Brad Newman, who started ReviewerCard as a direct result of a result of this experience with “one rude waiter” in the south of France:

Brad ordered the “Rapido Breakfast”, which usually comes with a croissant, orange juice and black tea. Brad kindly requested green tea instead of black, although the waiter refused to accommodate him. After numerous requests, the waiter finally brought green tea and then proceeded to drop a bill with a significant fee for the tea switch. Once Brad commented on how appalled he was at the service and that he would promptly write a review as soon as he returned to his hotel room, the manager and waiter came over and offered their sincerest apologies. They comped the breakfast and begged him to come back throughout his stay. Brad believes this was only the result of mentioning he was going to review their business online.

So what do you get when you “join the community?” A magic card which will solve all your problems with rude French waiters who refuse you green tea with three little words. But those three words—“I write reviews”—are just the first half of the implied sentence. The second half is, “…and I’m a jerk who expects better treatment/food/products because of it.”

The card is for schmucks and the Internet does not take kindly to schmucks.

Of course, reviews and the Internet have a special relationship. They’re everywhere you turn, from the amazingly snarky (“That’s when I found the 571B Banana Slicer. Our marriage has never been healthier, AND we’ve even incorporated it into our lovemaking.”) to the actually helpful (medical reviews on HealthGrades).
The world of online reviews is uneven and nebulous at best.

Yelp has been accused time and time again of shaking down businesses for cash in exchange for a litany of benefits, including more visibility on the site, removing negative reviews, and, more insidiously and mob-like, not removing positive reviews in return for payment. Claims of user extortion are common.

So it’s not that surprising that someone is now trying to cash in on the extortionists themselves—by making them pay for the privilege of possibly not paying (how very “emperor’s new clothes” of them!). Even vultures get picked at by other vultures.

In the LA Times column on the subject, Newman claims to have sold a hundred cards at $100 each. This means there are at least $10,000 worth of idiots in the world. You guys? We need to talk about these awesome magical beans I’m selling. I can get you a GREAT price. 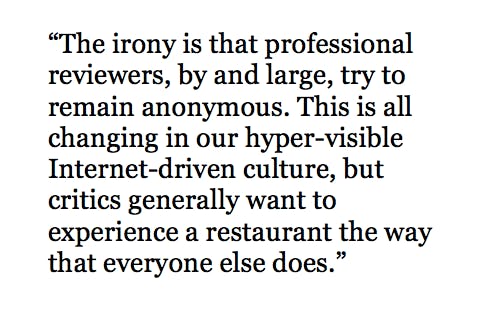 In their purest incarnation, crowd-sourced reviews are truly valuable. People tell you about their experiences and you take them into account when you want to go somewhere or do something. It’s the equivalent of asking your friend if they’ve tried that new tapas restaurant, except here you’ve never met said “friend,” and they may or may not know what they’re talking about.

The fact that the barrier to entry is so low means that businesses get publicly dinged for just about anything. Coffee too hot? One-star review. Steak too big? Server had a bad hairdo? Hostess who called you ma’am instead of miss? Another one-star review. What’s even more disturbing than all this personal vitriol unleashed into the world is that what’s said online has actual ramifications. When there are a whole lot of one star reviews, those businesses get less busy—whether or not they deserve it.

It’s for this exact reason that restaurants and other businesses now kowtow to online reviewers. They woo them with perks: Yelpers who earn “Elite” status are invited to special parties. Travelers who leave negative reviews on TripAdvisor are occasionally contacted by the hotel and given free concessions or stays. Managers know just how damaging bad feedback can be.

Which brings us back to the ReviewerCard. The whole enterprise is deeply unethical, because it preys on—rather than rewards—the fact that good businesses want to keep their reputation intact. It’s the old cafeteria scam: give me your Twinkie and I’ll be your best friend. It makes me want to take a shower.

Thankfully, the Internet is grossed out too. Tweets have been fast and furious, including from actual reviewers like UK food critic Jay Rayner and Atlanta-based John Kessler (no relation). The entire blogisphere has weighed in with stories on Eater (and their regional satellites), Consumerist, Gawker, The Huffington Post, and more. People are pissed. 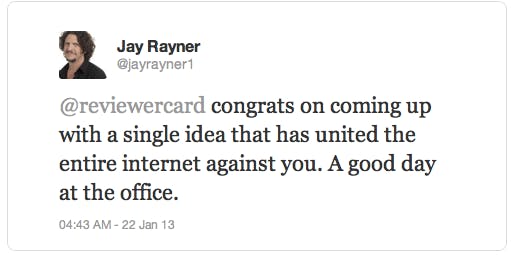 That’s because we don’t take kindly to people who try to job the system with vague threats—which is what flashing that moronic card is tantamount to. The card says “I write reviews,” meaning, “Watch out, because I can easily write a negative review. You need to hook me up.” The cardholder wants their back scratched and will, in turn, do some online review back-scratching of their own.

The irony is that professional reviewers, by and large, try to remain anonymous. This is all changing in our hyper-visible Internet-driven culture, but critics generally want to experience a restaurant the way that everyone else does. Fake online critics, on the other hand, want to experience the restaurant the way they think a restaurant critic would get treated. True critics assume there’s a base level of service that everyone is exposed to; the self-appointed critic assumes there’s a special level of service reserved for a very special class people (that they hope to be a part of). Chef Giselle Wellman of Petrossian in West Hollywood may have said it best when she tweeted, “Shouldn’t we be giving everyone good service not only because you write reviews?”

Hopefully one mistaken glass of tea with a bad attitude won’t lead to more unnecessary revolutions in online criticism. The Internet has more important things to review. Like banana slicers.