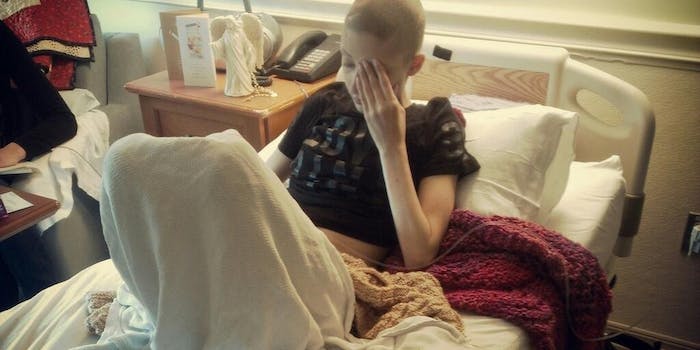 The Internet connects a hardcore musician and a dying fan

Thanks to the power of the Internet, a terminally ill patient in suburban Philadelphia will get to interact with one of her idols.

Thanks to the power of the Internet, a terminally ill patient in suburban Philadelphia will get to interact with one of her idols.

Marie Fowler is a 19-year-old twin from Oaklyn, New Jersey. According to her YouTube video, she has been battling leukemia since 2011 and underwent a transplant in January in order to stave off the cancer. Unfortunately, the transplant did not take; her leukemia returned, forcing her into hospice care.

Her family says Fowler has only days to live. With the help of her sister, she posted a video to YouTube in which she expresses a desire to meet Kellin Quinn, lead singer of post-hardcore band Sleeping With Sirens.

The video, which received over 12,000 views in less than two days, quickly made its way to Reddit. On r/pics, a neighbor of the family created the account KellinMeetMarie on May 10 and told Fowler’s story to the subreddit’s 3 million subscribers.

“This is 19 year old Marie Fowler. She’s a girl from my town. Yesterday she found out that her cancer has returned and it is now deemed terminal and she is already in Hospice Care. Her final wish is to meet Sleeping with Siren’s vocalist Kellin Quinn. Reddit, can you please help us?” read KellinMeetMarie’s post, accompanied by a photograph of Fowler.

The post was soon flooded with condolences, upvotes, and attempts to unite Fowler and Quinn.

“Tweeting him may be the best way to get his attention,” redditor tw3nt suggested.

“I know the guitarist, Jack. His Dad is a friend of mine. I’ll call him right now,” redditor ptoomey offered.

Fowler’s story then made its way onto Twitter and Facebook, where fans and sympathetic parties alike pleaded for the musician to meet his dying fan.

I know your getting a ton of posts about a girl in Oaklyn NJ that is dying, I dont know if you can do anything to visit this poor kid before the inevitable happens but If I can do anything to help you should you be able to. My home is at your disposal, home cooked dinner, bbq, use my car… I dont know man whatever you would need.

Supporters also created the Facebook fan page Kellin Meet Marie for the cause, earning over 3,000 likes in less than a day.

According to r/defaultgems, a subreddit dedicated to collecting notable moments from the site’s default communities, it took less than 20 minutes for word to reach Quinn.

“OFFICIAL UPDATE FROM MARIE MEET KELLIN FACEBOOK: Unfortunately Kellin is unable to meet Marie at the time due to touring schedule. HOWEVER he is skyping with Marie and Michelle tonight. Thank you to all 2000 +[Who liked the page] and everybody else who helped. Without you this would not of happened. It makes me so happy knowing there are so many incredible and loving people in our world who are even willing to help a stranger,” KellinMeetMarie posted on May 10.

Quinn himself took to Twitter to spread the word about Fowler’s story.

“Hey guys thank you so much for your support in rallying for Marie :) she’s my hero! So grateful to have such caring fans,” he tweeted.