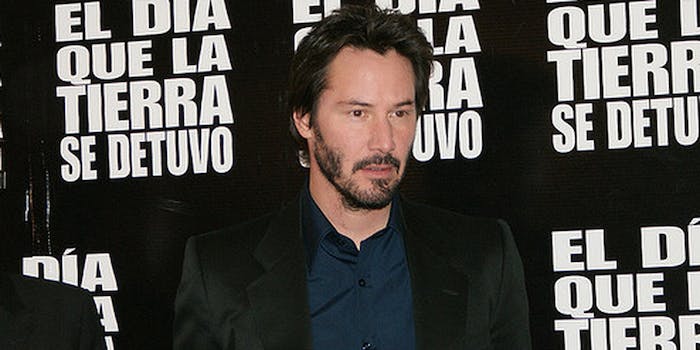 This dude gets around.

As beloved as he is in America, Keanu Reeves may be an even bigger star abroad. Last year’s John Wick seemed like a comeback, but in fact Keanu has been hard at work for years on his own projects, even directing a film of his own in 2013, Man of Tai Chi. And in the course of our many clicks, the Daily Dot stumbled upon a hidden treasure trove of Keanu clips from his capers across the world that we couldn’t help but share:

Consider yourselves warned, because there’s some serious Keanu content up ahead!

Evidently, while working on Man of Tai Chi and another recent opus, 47 Ronin, Keanu spent a good while in East Asia:

People in China were really psyched to see Keanu, enough so that we have footage of him taking a smoke break. At the end of this video, you can see a guy running towards the cameraman as if to say, “Leave Keanu alone!!”

But Keanu is a great sport and made lots of appearances on Chinese TV, all for the fans. We’re particular fans of this appearance:

It’s hard not to love Keanu’s energy, or chi. If you watch this video, you may even absorb some of that legendary chi.

Keanu’s interest in Tai Chi, meditation, and Buddhism goes back further, however, to when he played the Buddha in the 1994 film Little Buddha. In today’s parlance, we would probably label this ‘problematic.’ But the ’90s were a more innocent time.

We can all be thankful, at least, that the film sparked Keanu’s interest in Buddhism and gave us such golden clips like this one, however:

Here we can see Keanu talking about karma a bit more, though his voice gets drowned out by Russian voiceover. “We all want to be happy,” says pre-Sad Keanu. There’s also a 30-minute version of this video in English for those who wish to learn more.

Speaking of Keanu and Russia, someone compiled a nine minute supercut of all the footage of Keanu in Russia, ever. You know, in case nine minutes of blurry Keanu was something you wanted to watch. But we won’t embed that, because that might just be too much Keanu. Hardcore Keanu fans only!

More recently, Keanu went to Uruguay, donning a very Che Guevara cap. The newscaster asked him about the Academy Awards, which Keanu was not attending in 2014. The interview turns to small talk, with journalists telling Keanu how much they liked Sandra Bullock in Gravity. Fun!

Apparently he filmed an interview about motorcycles while he was there. It turns out Keanu loves his hogs.

This video where Keanu talks to Greek television about his 2001 film Sweet November is a true gem. For one thing, the combination of a Keanu interview and Enya’s ethereal soundtrack belongs in a genre of its own. Second, there’s a fragment of a clip where Charlize Theron says something about redemption to Keanu. Coincidence? Or conspiracy?!

Another good Keanu-abroad clip is this one, in which he talks to France 24 about the Sad Keanu meme. Keanu claims that he is “normal,” and that “we all go through phases of happy and sad,” but, to be honest, he seems a bit sad to me as he says it. He brightens up when he talks about Tai Chi, of course.

As an aperitif, I want to offer up this clip where Keanu talks content. “How are we watching our stories,” he asks. A lot of stuff definitely is getting made, and it’s a crazy, brave new world. Or is it all just a bubble? Dust in the wind? Keanu doesn’t pretend to have all the answers, and that’s all right. We can explore together.

Overall, Keanu just seems like such a chill guy. Like here, where he gives up his seat on a Q train to some other person, or here, where he’s just singin’ a song. For those craving more Keanu, this Reddit AMA should be just the thing. As it turns out, Keanu lives simply, is a really generous guy, and like a true Canadian, loves Hockey.