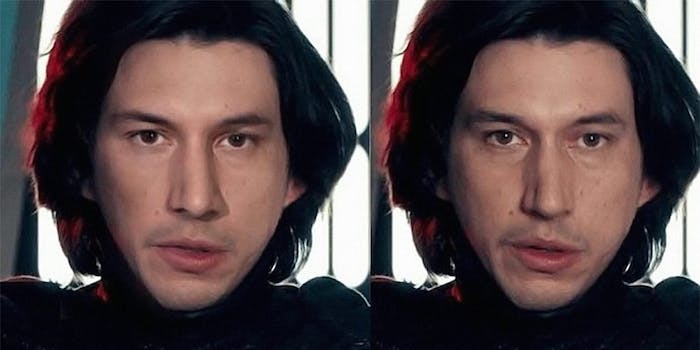 It is terrifying how much Adam Driver looks like Keanu Reeves

Woah! This is weird.

Adam Driver, who currently stars as emotional villain Kylo Ren in Star Wars: The Last Jedi, looks a little bit like a young Keanu Reeves. What’s that? You don’t think so? Well, take a look at this startling photograph that comic book writer Mark Millar put together:

Yes, the photo on the right is Adam Driver. The photo on the left is Keanu Reeves’ face photoshopped on Adam Driver’s head. We’re pretty sure that’s correct. The internet was confused and distraught by the image.

It too me much too long to figure out who was who. https://t.co/uWMCnU8p9V

This upsets me on so many levels. https://t.co/9nLJoHiVXI

This side by side pic just ruined my life https://t.co/JdALx4bfAn

Y’all have lost your mind slandering Keanu like this. Repent. https://t.co/anj6lPxBzy

Why y’all gotta do Keanu Reeves like that? https://t.co/jqilwouuoZ

But others embraced the image and used it as a springboard for jokes involving the two actors’ combined filmography.

Now we know who Hollywood would call if they ever do a John Wick Jr. spinoff.

So Kylo Ren joined the dark side because someone killed his dog https://t.co/ewKBOEWmKx

Adam Driver actually doesn’t look that much like Keanu Reeves (it’s mostly the hair!) but picturing Reeves as Kylo Ren is both amusing and disturbing.

Anyway, if Reeves was cast in a Star Wars film, he’d definitely be a member of the Resistance.