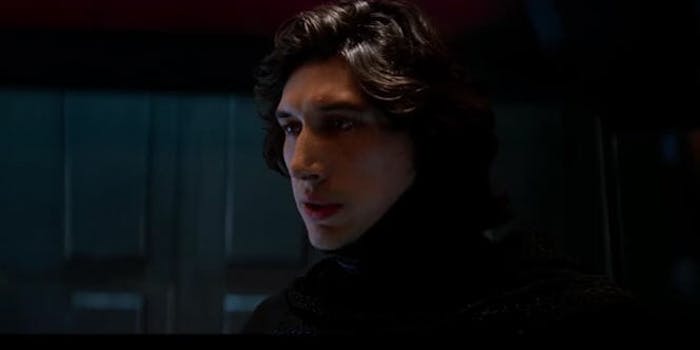 Star Wars's Kylo Ren may be the emo-est character ever.

Adam Driver says he doesn’t know what emo is. In a recent Rolling Stones interview, he literally asked the writer “What is emo?” leaving the whole internet scratching its collective head.

It is quite perplexing, after all. How can an actor who played Star Wars‘s dark-haired, black clothes-wearing, angsty Kylo Ren (a character that inspired 2015’s popular meme “emo Kylo Ren”) not understand or identify with the only word that truly describes the villain?

The interview offers a much-needed explanation: Driver was simply too busy to acquaint himself with the style and genre of music. He trained for Juilliard and the Marines simultaneously. He is an acting prodigy/genius. He doesn’t need to know what the word “emo” means, yet he spent years at Juilliard so he could perfectly embody it.

And just to set the record straight, just because the man doesn’t know what the word emo is, it doesn’t mean he can’t express some truly emo opinions. For example, Driver offered up a justification for Kylo Ren’s murder of his own father.

“It’s not like people weren’t living on the Death Star,” he explained, “Isn’t that also an act of terrorism against the hundreds of thousands of people who died there? Did they not have families?”

Read the rest of the interview here.