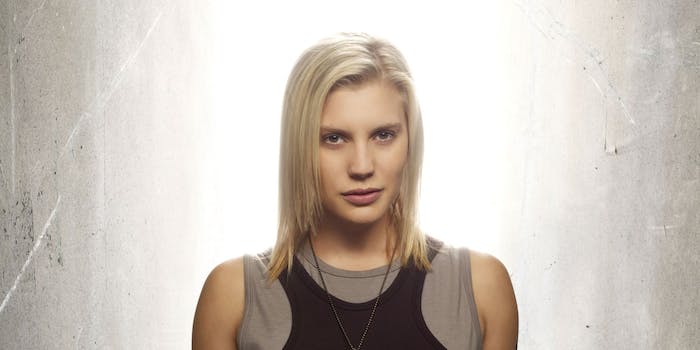 So unfollow we all: Katee Sackhoff alienates fans over gun debate

The Battlestar Galactica actress was simply trying to encourage gun safety when she found herself losing followers left and right.

Kara Thrace, the badass, no-bullshit fighter pilot code-named Starbuck on the revamped Battlestar Galactica, was a character who knew not to bring a knife to a gunfight. But some fans weren’t prepared for actress Katee Sackhoff, who played Thrace, to have that much in common with her character.

The Harley-driving, country-loving actress, currently co-starring in the new A&E show Longmire, ran into an unexpected firestorm on Twitter on Monday after she reacted to news of a gun-related fatality involving a child shooting a parent:

The call for gun safety quickly incited a response from many Twitter followers insisting that prevention, rather than safety, was the key:

@kateesackhoff @cnn @cnni Here’s a radical idea folks. How about NO gun?

Sackhoff, perhaps aware that more than one in three Americans, or more in the South, owns a gun, responded pragmatically.

Never gonna happen in the US. Proper gun safety is a necessity though. RT @fulsomprison: (cont) tl.gd/m137kg

In another tweet, the Oregon-born Sackhoff elaborated on what she saw as the reality of gun culture in the U.S.:

There are many safe homes with guns & kids in them. I’ve grown up around them for hunting & NEVER handled one without an adult. It’s about safety, education, and loving & listening to our children. There are so many reasons why guns are scary but there are so many reasons they are part of our world & lives. There is no easy answer here that will satisfy everyone.

But the easy answer for many fans, at least on Twitter, was a simple unfollow; Sackhoff later joked that she had lost over half of her Twitter followers after airing her thoughts on gun safety vs. gun control.  While she was apparently exaggerating the number of lost followers, the Washington Times noted that her Twitter follower count dipped down to around 98,000 on Monday–a number that’s rebounded to over 130,000 since, possibly due to advocates of gun education who want to show their support.

Sackhoff, who’s no stranger to activism—she went on a cross-country motorcycle ride to raise support for areas affected by the BP oil spill—didn’t seem bothered by the outrage.

Well I guess I just learned talking about #GunSafety inspires a massive debate. Pro-Gun or Anti-Gun SAFETY should be unanimous! #OneLove

The noted sci-fi actress is gearing up for a Comic Con appearance next month to promote the long-awaited Riddick: Rule the Dark, the latest in the Chronicles of Riddick series, in which Sackhoff stars opposite Karl Urban and Vin Diesel.