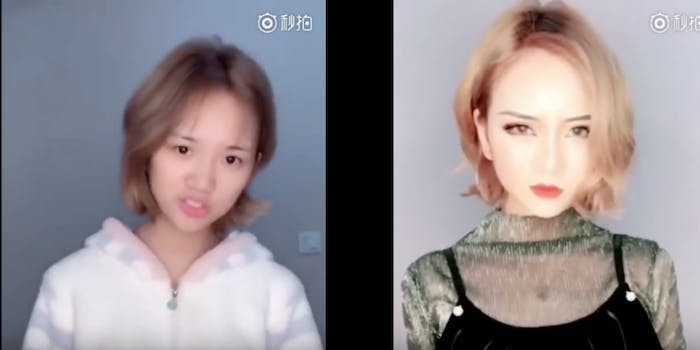 What you see is not always what you get, and if you judge someone by appearances … well, karma is a bitch. That’s the theme of a wildly popular new Chinese meme, where people instantly transform from plain and nondescript internet posters to jaw-dropping hotties.

Every video starts with  Veronica from the gritty Archie reboot Riverdale declaring that “karma’s a bitch.” Then a couple of bars from Kreayshawn’s “Gucci Gucci” play as the person pulls up a blanket, revealing their transformation into a perfectly coiffed, perfectly made-up model. It’s basically magic.

There’s a lot to love here. This is an elaborate, high-effort meme that compresses the best things about YouTube makeup videos into a Vine-length package. It’s got comedy, it’s got visual appeal, and it doesn’t gender-discriminate. Men know karma’s a bitch, too. Plus, it brings back that Kreayshawn track, which everyone acknowledges was really good—we just needed a nice, long break from it.

The meme made its way to the U.S. through Reddit Thursday. The compilation video above quickly rose through the r/videos subreddit, and it’s now been viewed well over a million times. On Friday, BuzzFeed News reporter Kassy Cho started a popular Twitter thread pointing out her favorite examples of the meme:

Hello it is Friday and I am here with the latest Chinese meme: “karma’s a bitch”

Here are some of the best ones: pic.twitter.com/tdjItEkzvL

If we’re going to do a YouTube challenge meme in January, let’s make it the Karma is a Bitch Challenge and not eating Tide Pods.