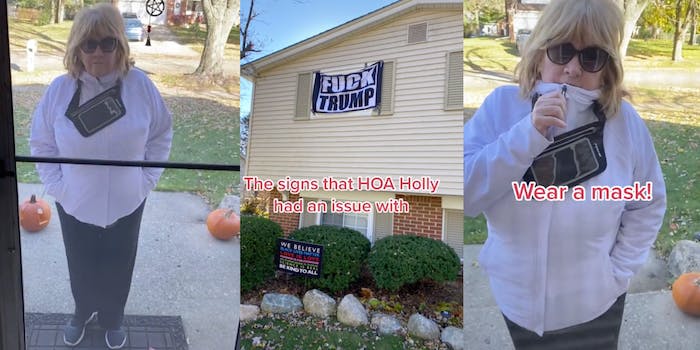 'I don't want to be friends with you, goodbye. You're a Trump supporter.'

The internet is littered with “Karen” videos, and far too often, they end in an unsatisfying manner, with the titular Karen bullying her way into whatever unreasonable demand caused her to throw a tantrum. But a recent series of TikToks details a starkly different type of Karen video, as a homeowner forcefully rejects a maskless Karen’s request to remove her “Fuck Trump” lawn sign.

TikToker @austenjayne uploaded the videos, which have cumulatively earned millions of views. The homeowner is already engaged in conversation with Karen at the start of the first video. Maskless and brimming with righteous indignation, Karen informs the woman that she is welcome to “like Biden,” but her “Fuck Trump” lawn sign is unacceptable.

Karen’s insistence that the homeowner cannot use “profanity” in her yard decor earns her a response typically used by Karens: “It’s called free speech.”

Karen, who reveals that her real name is Rhonda, says she wishes to shield her grandchildren from profanity. The homeowner, disinterested in Rhonda’s drama, latches onto her uninvited visitor’s lack of a mask.

“Put a mask on. You’re the reason everyone is sick,” she says, as Rhonda halfheartedly covers her chin with her shirt collar. The homeowner then informs her visitor that the lawn sign is there to stay. Rhonda, in classic Karen fashion, immediately threatens to report the sign to the police.

The homeowner could not care less. She invites Rhonda to leave her property and makes it clear she isn’t interested in being amicable: “I don’t want to be friends with you, goodbye. You’re a Trump supporter. I don’t need my child to have love from you.”

Karen does her best to gain the moral high ground, informing the woman that she shouldn’t “use such hatred,” but the homeowner is having none of it.

“Goodbye, get off my property,” she shouts from the front door. “You are not welcome here.”

Typically, the interaction would end there. But this is a Karen we’re talking about; they always angle to get the last word. Karen stops at the end of the homeowner’s driveway to inform the woman filming that she feels “bad” for her son.

It doesn’t go the way she planned.

“He knows Trump is a horrible person,” the woman filming says. When Karen protests that she still shouldn’t say “the F-word,” the homeowner has enough. She repeatedly screams the word at Karen, again demanding that she remove herself from her property.

The shouted exchange piques the interest of several neighbors, one of whom steps out to ask what’s going on.

“A sign for what?” she asks Karen after learning what caused the argument.

“About what? About Trump?” the neighbor asks. Karen, clearly thinking she’s found a kindred spirit, makes her way toward the neighbor’s home. Her expectations are soon shattered.

“Yeah, well fuck Trump,” the neighbor shouts, to the delight of the video’s poster.

“Thank you,” she shouts to her new best friend. The video concludes with the two women shooing Karen from the area and sports the text, “Not today Karen.”

In a clarifying video, @austenjayne shared photos of the Trump sign Karen was so worked up about. The “Fuck Trump” sign is draped over the side of her home like a flag next to a rainbow Pride sign.

Thankfully, it appears @austenjayne is not all talk. The most recent video on her page shows her standing in line to vote.