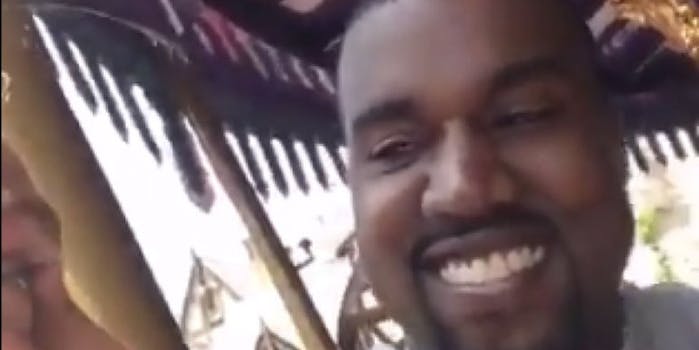 Kid gets a 9-second interview with Kanye West, and Kanye gives the best answer possible

One lucky-ass young man, Michael Jarrah, recently got to meet the world’s most famous Kanye, Kanye West, at Disneyland. If you had one chance to ask Kanye one question, what would it be?

That’s correct: “How soft are Kim Kardashian‘s boobs?” But that was asked and answered by Kim herself in Caity Weaver’s recent GQ profile. What if you could ask a second question, though?

The kid went with this brilliantly subtle troll: “How did you write ‘I Love Kanye?'”

How, indeed, did Kanye write history’s dopest narcissistic anthem, notable for rhyming “Kanye” with “Kanye” many, many times?

Remember: Kanye is a genius, and he’s very aware of it. Some would say too aware. If you troll him gently, you will get trolled back hard.

“I just thought about what I loved,” he replied.

Look at that grin. He knows he just dunked this interview harder than LeBron James dunked that J.R. Smith alley-oop Thursday night.