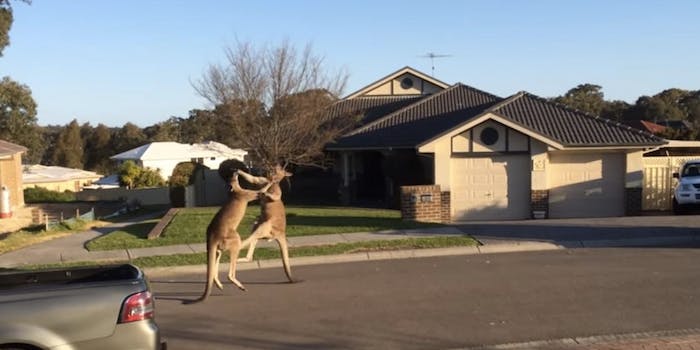 Proof you never want to fight a kangaroo

In case you were thinking that might be a good idea.

Where’s Vince McMahon and Crocodile Dundee when you really need them?

The ultimate street fight captured via YouTube for the world to enjoy is not 50 Cent versus Floyd Mayweather or even Sam Soliman versus Jermain Taylor for the IBF title. Instead, it’s a pair of sparring kangaroos going at it in what looks to be a residential neighborhood in New South Wales in Australia. Apparently, the myth–perpetuated via the cartoon universe–that these large marsupials can be nasty buggers when provoked, is true.

As many YouTube commenters point out, these creatures, which can grow to a height of 8 feet and weigh as much as 200 pounds, are more likely sparring or messing around than actually engaged in combat. Kangaroos have powerful tails and sharp toenails, which can be used to rip an opponent to shreds. NFL scouts are no doubt drooling over this clip, seeing some middle linebackers in the making.

Note to Fox TV and Bravo: I smell a reality show here.