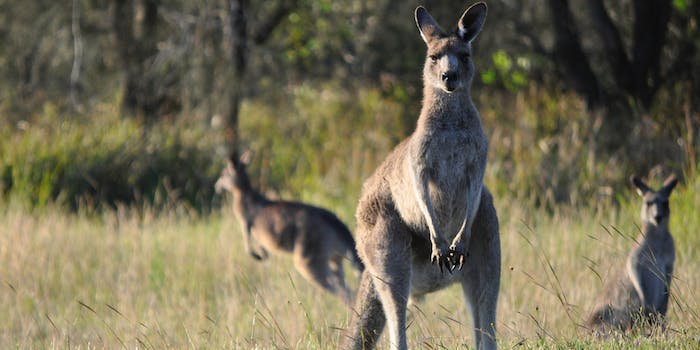 For those about to rock, we salute... roo.

When you think of kangaroos, you probably imagine them doing one of two things: hopping or boxing. It’s a well documented fact that the large marsupials are both expert hoppers and boxers, but rarely has anyone ever stopped to consider that kangaroos’ personalities extend beyond the boxing ring; nor do their spring-action legs define who they are.

While conducting field research on Perth’s Heirisson Island (not really, I couldn’t afford the airfare), I met Skippy, a kangaroo with dreams of breaking free of Australian society’s stereotypes about roos. He’s a rather nondescript kangaroo; what caught my eye, however, was that he greeted my car with an extensive air guitar riff.

“Since I was a joey, I always dreamed of playing the rock guitar,” Skippy told me over a shrub lunch Monday afternoon. “Me and me mates, me mob, we saw AC/DC play in Perth. It was raucous, I couldn’t get enough. I had to be an axeman.”

Drawing inspiration from Angus Young, Skippy recalled, he saved up what little money he could and bought his first Gibson SG. “Being a roo, it isn’t easy finding work, but I managed. I caught blowies [large flies] for me first gig, but after two weeks I was getting sick to me stomach. I went into business for myself after two weeks of that job.”

Kangaroos are fast, some clocking in at 43 miles per hour. Skippy took advantage of this speed and went into business for himself running a rickshaw for out-of-towners.

“I made the money in only five shifts. So I hopped down to the guitar shop and got me Gibson SG.”

Skippy’s since made a name for himself in the Perth music scene. He plays lead guitar for Dennis and the Hoppers, a garage rock band heavily inspired by their Aussie predecessors, AC/DC.

“You know, guitar is about much more than just the shredding,” Skippy said. “It’s about breaking through the expectations set by your folks, by the park rangers, by ‘nature.’ We roos, we’re a rockin’ mob. We’re not about boxing, and we do more than hop. It’s time to tell the world.”

As long as Skippy keeps shredding the way he shreds, the world will soon know how hard kangaroos really rock.

We salute you, Skippy.