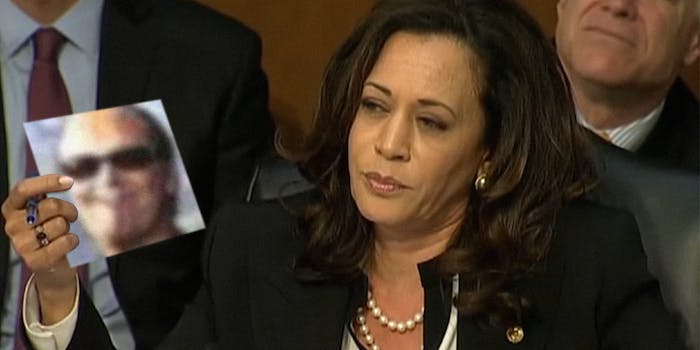 How a Kamala Harris meme turned into a fight over corncobs

The term does not mean what you think it means.

To navigate Twitter in 2017, you need to keep up with many inside jokes, memes, and quotes that change on a daily basis. It’s easy to become confused about why something is trending. But doing research before tweeting about it usually pays off. Otherwise, you’re setting yourself up for a roast.

Journalist Al Giordano? tweeted about the inclusion of the term “corncob” in an anti-Kamala Harris meme that was being circulated around the internet, and he linked to a definition of it on Urban Dictionary.

“Every cretin who has spread this meme needs to reckon with how it uses “corncob,” a rape culture and homophobic term popular among dudebros,” he tweeted.

People said that the problematic meme was being circulated by Bernie Sanders supporters, but it’s unclear who actually created the meme. In the background of the meme, behind a photo of Kamala Harris, there’s a logo for “Centrist Corncobs 2020.” It’s likely a joke created by people who don’t support Harris as a possible Democratic candidate for the 2020 presidential election.

But was the meme referencing a homophobic term created by so-called dudebros? Twitter says no. In fact, it probably came from @dril, an account that does arguably the best job of parodying the entire internet.

The infamous dril tweet states that those who claim they are “not owned” are actually in denial. The meme is likely suggesting that Harris is not liberal/independent enough to represent the Democratic party. But it’s odd that, with all that is going on with this meme, it’s the “corncorb” reference that is provoking ire here.

Anyway, people on Twitter quickly pointed out the real origin of the term.

Dril replied to Giordano?’s tweet in the account’s usual fashion.

Other people followed suit with some references to actual corn on the cob.

Giordano? apparently wasn’t pleased with people calling him out on his tweet, nor did he issue a correction. Instead, he began blocking people.

It seems that no one wants “corncob” to happen.

holy shit the bluechecks are attributing wholly extraneous and incorrect meanings to the “corncob” meme this is balls-out hilarious https://t.co/n7y9MmvKV4

Congrats to Al for surpassing "Milkshake Duck is a conspiracy against gamers" as the worst take on a meme pic.twitter.com/8rn4jlXBdB

The lesson here is clear. Always check for @dril references before you send that tweet.