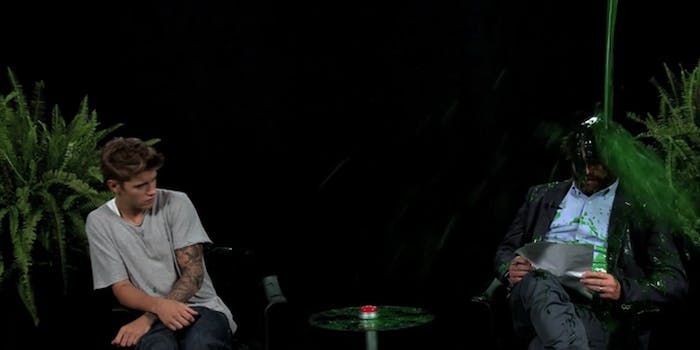 "You've had three hairstyles," Galifianakis says. "What's next for your career?"

Between Two Ferns, the awkward Funny or Die interview series hosted by comedian and actor Zach Galifianakis, has returned. This time, boy king Justin Bieber is in the hot seat, and there are so many great moments. Here’s Galifianakis’s intro: “It’s really exciting to talk to you, especially in the middle of your public meltdown.”

Bieber holds his own, though. When Galifianakis asks him, “You know what I was doing when I was your age?,” he responds, “Finishing fourth grade?”

Galifianakis also brings up the Anne Frank Belieber debacle, and the recent clip of Bieber drunkenly peeing in a bucket, which sends the comedian into a rage, and leads him to discipline Bieber is a borderline creepy way.

There’s also a nod to You Can’t Do That on Television, likely as a tribute to Bieber’s homeland of Canada.