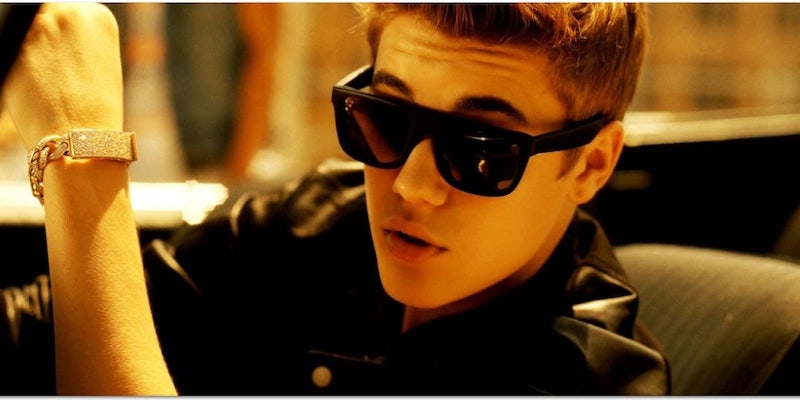 Every time you look at Bieber's Calvin Klein photos, remember he's the same guy who urinated in a mop bucket.

Justin Bieber is the Kim Jong-un of pop stars. He’s an entitled monster surrounded by a blinding wall of privilege and access, absolute power that has corrupted absolutely. But don’t take my word for it: Listen to the polls.

Justin Bieber has been named the worst musical act ever, the worst Saturday Night Live guest, the worst neighbor, the worst airplane passenger, the worst person to sit next to at a basketball game, and the worst celebrity role model. He’s also definitely the worst guest at the Anne Frank House—where, after a 2013 visit, Bieber signed in the house’s guestbook, “Truly inspiring to be able to come here. Anne was a great girl. Hopefully she would have been a belieber.”

Yet no matter how many times he misses the point of the Holocaust or says that everything happens for a reason—even rape—he won’t go away, and the Internet still wants you to bone him anyway. Just Jared, Jezebel, and The Gloss report being enigmatically turned on by his recent photo shoot with Calvin Klein, ripping off both Marky Mark and Nick Jonas. However, your response to these photos should be the least enigmatic thing in the world. I would like to play a Pavlov’s game with you: Every time you look at a photo of Justin Bieber without his shirt on, remember that this is the same guy who urinated in a mop bucket (while yelling, “F**k Bill Clinton!”), got slapped with a DUI for illegally drag racing, spit on his fans, and sang about killing “n***ers” and joining the KKK. That wasn’t even his only racist joke. Are you still entertained?

Bieber’s behavior isn’t just unsexy—it’s also the continued product of white privilege, profiting off of the exploits of black musicians and producers while espousing racist views and then having his PR team cover him with an allegedly ghostwritten apology posted to his Instagram. As Vice’s Sam Wolfson explains in a 2014 post about Bieber’s mea culpa:

One year ago, Bieber wrote an open letter to fans attempting to clear up some allegations that had been made about him in the press. It was misspelt and poorly punctuated, including lines like ‘if Anyone believes i need rehab thats their own stupidity lol I’m 19 with 5 number one albums” (sic) and ‘I know my talent level and i know i got my head on straight. i know who i am and i know who i’m not My messege is to to believe’ (sic).

By contrast, this apology is written in pretty perfect English, and uses a lot of the known PR tricks politicians are advised to use when apologising for a fuck-up, demanding credit for being honest and using language to distance your current incarnation from an “other” version of yourself you no longer recognise. Perhaps Justin Bieber’s grasp of English has come on a lot since 2013. Perhaps he didn’t have much to do with this apology at all.

What’s particularly troubling about Justin Bieber’s apology isn’t that his PR team reportedly spent years trying to cover up the offending video—which doesn’t exactly spell R-E-M-O-R-S-E—it’s that Bieber has gone out of his way to appropriate black culture from the very start of his career. Originally a YouTube sensation, R&B singer Usher saw Bieber’s videos and decided to mentor him, under the wing of rapper Ludacris and songwriter Ezekiel Lewis; on Instagram, Bieber prefers the company of his “black friends,” like Lil Wayne and Lil Twist, and Nicki Minaj is there to guest on his songs for added street cred. Ludacris similarly offered the obligatory rap verse, a common staple of Katy Perry songs, for Justin Bieber’s breakout hit, “Baby,” when the singer was just 15.

This is the same year a “swagger coach,” Ryan Good, was hired to make Bieber’s image more urban, in the vein of Miley Cyrus. As the Huffington Post’s Darron T. Smith puts it, “Good was hired to refine his image in ways acceptable to white audiences while optimizing coolness. The message—be cool, but not too black.” While Cyrus has long been criticized for appropriating black culture—especially after her much-lambasted VMA performance in 2013—Bieber has skirted such criticisms. In fact, Sharon Osbourne, one of the co-hosts of The Talk, lamented that his black friends were corrupting him, as if it somehow weren’t Bieber’s fault.

But as Daily Dot contributor Olivia Cole reminded us, “Implying that Justin Bieber’s bad behavior is somehow the result of black culture’s influence and not the result of… unchecked white privilege, unchecked arrogance, poor parenting, limitless financial resources, armies of Yes Men, and well, a shitty personality, is not only deeply ignorant, but deeply racist.”

In her post, Cole further contrasts Justin Bieber with Trayvon Martin. Bieber has made headlines multiple times for his marijuana use, including on a plane. According to reports of the latter incident, the attendants on the plane actually had to wear oxygen masks because of the volume of smoke in the plane, in fear that they might fail a drug test and risk their jobs. When the plane landed at a New Jersey airport, the DEA were unable to find drugs on his person, and the singer was let go, free to be a heartthrob again. Cole writes, “I can’t help but be reminded of the public’s reaction to the possibility that Trayvon Martin had been smoking marijuana on the night that he was killed. He was transformed into a dangerous, drug-running addict: a 17-year-old hurricane of chaos and violence. No one said he was lost. No one said he was a ‘little kid with a huge dream,’ ‘cute,’ trying to be a ‘mean boy’ but “mean as a f*cking kitten.’”

Yes, you read that right: His loyal team of henchmen picked him up and hoisted across the Great Wall like a tiny Mongol emperor.

If Cole wonders why Justin Bieber is a sexy kitten and Trayvon isn’t, there’s one key place to look: the Internet. In 2013, Bieber visited the Great Wall of China carried by bodyguards. Yes, you read that right: His loyal team of henchmen picked him up and hoisted across the wall like a tiny Mongol emperor. They say that pop stars perpetually stay the same age as they did when they become famous, and he’s perpetually a little boy propped up by all those around him. His adoring fans fulfill the same function. After the incident, they tweeted, “Only Justin would have somebody carry him up the Great Wall of China. Aw my baby boy.” Were a female pop star to behave this way—say, Ariana Grande, who allegedly said she hopes her “fans all f**king die”—she’d be an insufferable diva. But when Bieber does it, it’s soo cute.

You can pin the blame tail on the Beliebers all you want—his loyal tween fans and 58.9 million Instagram followers—but Bieber’s continued success as an adult wouldn’t be possible unless other adults were guiltily chewing on it like dazed donkeys. As New York magazine’s Vanessa Grigoriadis argues, his fame would only be possible in the “youth-obsessed, fame-hungry, prudish and pornish land of America.” While Bieber might be the most hated person in America, you’d be surprised at just what people will swallow when you’re young, male, white, and hot—at least after Calvin Klein takes a magic airbrush to your approximately one billion flaws. Some might find it sexy, but the rest of us just want to use that Photoshop to erase him entirely. That’s literally the hottest thing I can think of.