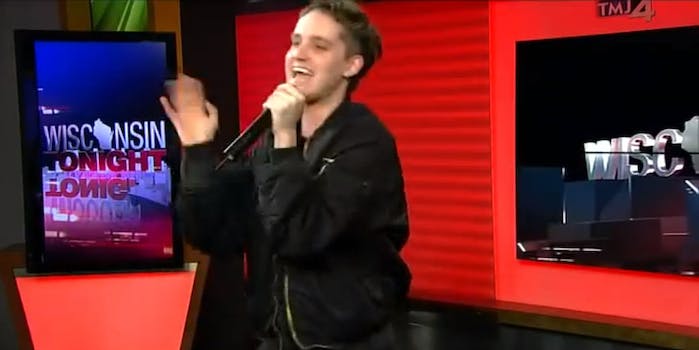 It's definitely the most hardcore rap about Greyhound buses you'll ever hear.

When it comes to honest, hardcore rap, no one conveys it quite like a scrawny teenager from Milwaukee, Wis. who looks like Will Forte.

A guy going by “Juiceboxxx” recently visited the studios of TMJ4, the local NBC affiliate in Milwaukee. There, on their news program, the overly eager, well-traveled young man performed a passionate version of his original song “Like a Renegade.” The song details his travels around the country on a Greyhound bus, which has historically been the transportation of choice for this country’s true renegades.

With out-of-control dance moves, an earphone that won’t stay in, and constantly referencing his phone to recall the lyrics, Juiceboxxx effectively proved that his song is to music what The Room was to cinema.

The clip, which was posted on the station’s YouTube channel, naturally went viral. So far, it has gained over 30,000 views on YouTube.

Juiceboxxx’s other videos aren’t much better. Consider his performance on the local Chicago program “Chic-a-go-go,” in which he dances—without a shirt—in front of a bunch of children.

We can only hope that Juiceboxxx takes requests. Who else would kill to see him perform, for example, Run DMC’s “Run’s House?”