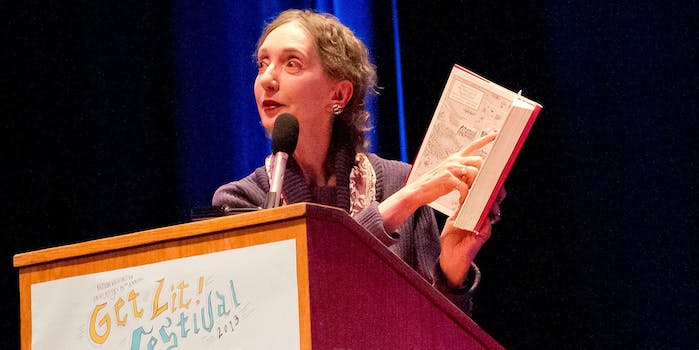 Finally, the take we were waiting for.

Joyce Carol Oates, the prolific and wealthy novelist who uses Twitter to troll dead rivals, blame street harassment on Islam, joke about Chinese people eating cats, fool people into thinking she thinks people hunt dinosaurs for sport, and lazily conflate art with real life, has sadly outdone herself once again. Let’s head over to the timeline for the exact quote:

Artists thrive on turbulence & estrangement from Establishment/authority–so T***p presidency would not be total disaster, for some.

Wow, this is… actually not the worst thing she’s said! Or, in other words, not a “total disaster.” Is Joyce getting the hang of social media nuance?

In times of political/social malaise, the powerful attractions & refuge of art. At once one is transported to a timeless & more human realm.

Just kidding, that’s garbage. Garbage, Joyce! Art is a refuge, sure, and great work has been produced in opposition to authoritarian regimes, but those same governments also censor, imprison, and, like… kill the artists they don’t like. Remember? From all those years you’ve been alive? No?

Just imagine: atop the pile of ash and bone, which is all that remains of civilization, a Great American Novel about life under President Trump. The ultimate vindication for art—if only someone were still alive to read it.