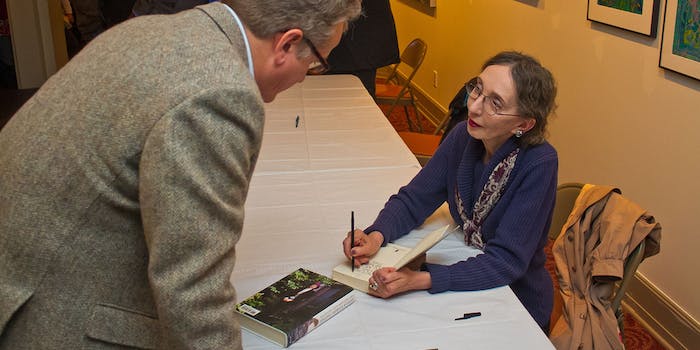 Joyce Carol Oates is the most baffling troll on Twitter

This is getting old.

This is an inane exercise, but let’s assume this tweet is a joke.

So barbaric that this should still be allowed… No conservation laws in effect wherever this is? https://t.co/hgavm9IBaM

Why would we assume this tweet is a joke? A few reasons:

So either this tweet is a joke (WHICH IT IS), the work of an environmentalist with bad eyes, or it’s the work of a deranged lunatic. Why did a massive number of major news outlets jump on option number three? 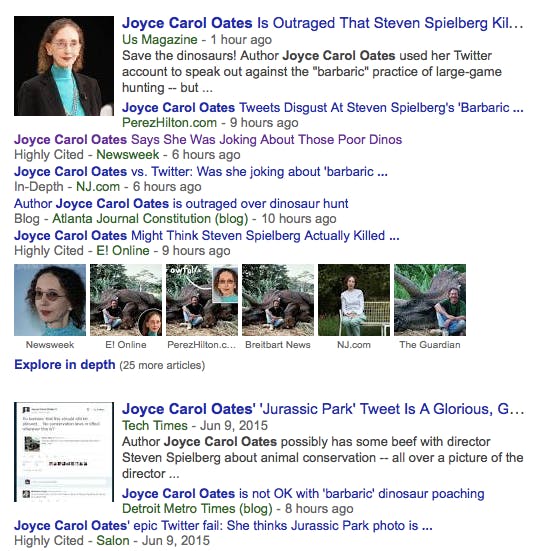 This is a ludicrous reaction to an obvious joke. In one of the hundreds(?!) of articles written about this joke, and over a half-dozen on their site alone, Salon landed on these the same three possibilities, broke down the odds on them, and still effectively went with number three by posting seven more articles about this tweet in a 24-hour period.

Seriously, why the dogpile on Joyce Carol Oates?

Joyce Carol Oates is a fiction of writer of great renown. You may well have read “Where Are You Going, Where Have You Been” in a high school or college lit class. She’s a National Book Award winner, a soon-to-be-former professor at Princeton University, and a perennial favorite to win the Nobel Prize in Literature. Nothing on this résumé would suggest she is the sort of person who thinks both that dinosaurs are alive, and that they deserve to live free in the wild.

All that said, Joyce Carol Oates has a ridiculous Twitter feed. She tweets about her cat, Cherie. She retweets animal Vines. She throws out half-baked media criticism and the occasional racist take on gender relations in the Middle East. To see a great writer have the Twitter feed of a normal 77-year old patrician woman—with all that entails—is both weird on first glance and not particularly interesting.

Steeling Cherie for inevitable unfeeling reviews & crude dismissals. "You call this art? My 1-yr-old grandson can do this."

Where 99.3% of women report having been sexually harassed & rape is epidemic–Egypt–natural to inquire: what's the predominant religion?

For example, Oates attacked the Mad Men finale in a series of tweets labeled as a diatribe. But her takes weren’t out of line, they simply lacked insight. They were the Mad Men finale takes you’d expect to get when catching up with your aunt at Thanksgiving. That isn’t what you’d look for from a “great writer.” And it also doesn’t meet the standard of a giddy fun follow.

Looking at the reaction to the Jurassic Park tweet, I expected to land on Oates being some sort of ur-troll. There are signposts that would suggest she falls into that category. She’s following 69 people (nice). She throws out ill-conceived Bill Maher-esque takes on Muslim violence and mediocre media criticism, peppered with deadpan throwaway jokes that could live in the worst of her fiction. It reads as parody.

But I don’t think she is trolling us at all. Strip away the name Joyce Carol Oates and you actually have a dreadfully pedestrian feed. Just because Oates can craft a good story does not mean that she or her social media presence should be captivating. Why are we even following Joyce Carol Oates, really?

The reaction to Oates’ feed is more telling than the feed itself. You could say that Oates’ place as a master of literature means she must be held to a higher standard… but I don’t know. I want writers to be people, and for the most part on Twitter they’re allowed to be (and also aren’t ironic celebrities). Most National Book Award winners have nowhere near the number of followers Oates has, and make nowhere near the impact she does with an off-handed joke.

We’re following Oates because the initial reaction to her joining Twitter was: “Holy shit, Joyce Carol Oates is on Twitter, that’s hilarious!” Her dour black-and-white avatar only heightened the sense that her feed was that of a living legend, rather than that of a person. Except then she was just a person, and not a particularly exceptional one.

It’s easy to make assumptions about the sort of woman who would produce Oates’ body of work and her Twitter feed, and that assumption has essentially cast Oates in the role of “batty old lady.” That isn’t fair, and these assumptions have turned the Internet into a bunch of Jack Warners, holding up an Onion article to prove a point that isn’t worth making. Essentially a standard now exists in a literary form whereby Joyce Carol Oates is less than Jose Canseco because he lives up to an established image and she doesn’t.

Joyce Carol Oates is an author and a human being. @JoyceCarolOates is @Horse_ebooks after BuzzFeed writer Jacob Bakkila took it over. A large segment of the Web turned its attention towards this feed so as to mine the inherent irony of product and our preconception of the creator. And then when that dissonance was revealed to be less than serendipitous, much of that same segment was enraged. To see the way a mediocre joke was reported was to see the innards of the Internet spasm uncontrollably, a reaction to a denied idea that was never really an idea in the first place.

TL;DR: Never tweet. And feel free to ignore those who do!

Photo via SpokaneFocus/Flickr (CC BY 2.0)