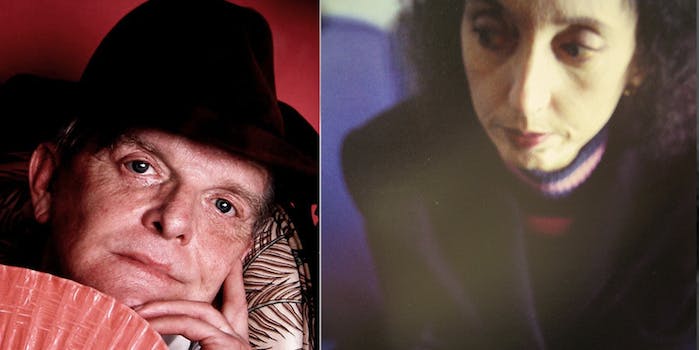 Is it still a subtweet if your target died decades before Twitter?

What’s the statute of limitations on passive-aggression? For the literary elite, it seems to be fairly lengthy. And if you’re literati and Twitterati, then apparently there are no limits at all.

Joyce Carol Oates, a three-time Pulitzer Prize nominee and one of the world’s most celebrated living writers, graced the Internet last night with what is probably the most vindictive tweet in recorded history:

Youch! Is the best part of this tweet the fact she calls Capote “druggy,” or the “LOL” at the end? Is it the fact that it’s a form of “subtweet,” in which Oates directs her spleen at someone indirectly?

Maybe it’s the fact that Truman Capote can’t exactly defend himself, since he died in 1984.

While you may think 29 years is a long time to cart around a grudge that size, you have to take into account the nastiness Capote once dished out toward Oates. From the book Conversations with Capote:

She’s a joke monster who ought to be beheaded in a public auditorium or in Shea or in a field with hundreds of thousands (Laughs.) She does all the graffiti in the men’s room and the women’s room and in every public toilet from here to California and back, stopping in Seattle on her way! (Laughs.) To me, she’s the most loathsome creature in America…. I’ve seen her, and to see her is to loathe her. To read her is to absolutely vomit….

What makes this vituperative spiel even worse is that by Capote’s own admission, Oates was an admirer of Capote’s work—at the time, at least:

[S]he’s written me a fan letter. She’s written me extreme fan letters. But that’s the kind of a hoax she is. I bet there’s not a writer in American [sic] that’s ever had their name in print that she hasn’t written a fan letter to. I think she’s that kind of person…. or creature… or whatever. She’s so… oooogh! (Shudders.)

As for Oates, National Book Award winner may not win any medals for social media expertise if she continues to earmark her own tweets with displays of hubris and bad taste, but at the very least she can serve as an example of how not to behave on Twitter.

In follow-up tweets, she probably meant to seem gracious after firing shots across the watery grave of Capote’s malcontent, but we’re not sure she succeeded. After noting that “he was being ‘witty’” (in quotes), she went on to call him miserable in his old age:

Like some others, Capote suffered what might be called the Malaise of Fame. Rich, renowned, self-dissatisfied, & now, no one to blame.

If you are ascendant, you can aspire to happiness in the future; but if, like Capote, you are at your peak & yet unhappy, no future.

Philip Seymour Hoffman brilliant in “Capote” (2005) as the idiosyncratic writer–a mesmerizing portrait & a parable of the (fated) artist.

Heaven help anyone who happens to be a fan of both Capote and Oates. Perhaps, instead of asking whether three decades is too long to harbor a grudge, an even better question might be why anyone asked Oates to judge an award named for Capote to begin with.

Photo by Jack Mitchell via Wikimedia Commons and halighalie/Flickr