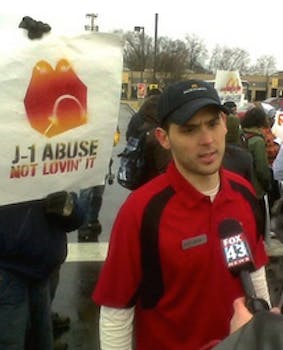 Jorge Rios's summer in the U.S. working at McDonald's didn't turn out anything like he'd expected.

Hampden Township in central Pennsylvania spent much of the past week protesting an apparent human rights violation at a nearby McDonald’s. Thursday morning, one of the victims took his fight online, organizing a petition to demand humanitarian change.

Jorge Rios is an Argentine student who came to the United States on a J-1 Summer Work Travel program, which charges students $4,000 in exchange for a trip to the United States and a summer spent immersed in American culture. The idea is that the wages made through part-time jobs help students like Rios recoup those expenses, and they enter fall with U.S. work experience and some savings.

Rios’s summer didn’t turn out anything like he’d expected.

Instead, through his part-time job working at a McDonald’s, he learned the harsh realities of some of America’s most terrible working and housing conditions. He faced threats, stolen wages, grease burns up and down his arms, and a workload that was 10 percent as large as the one he’d been promised, he wrote.

“The employer knew we were desperate for more hours, and he kept us on call to come in with 30 minutes notice all day and night,” Rios wrote. “I didn’t even have time to visit the public library.”

His employer is a man named Andy Cheung, a McDonald’s franchiser who owns six different restaurants in central Pennsylvania. Rios and his fellow travelers were forced to bunker into the basement of Cheung’s Hampden Township home at the cost of $300 a month.

“As many as eight of us lived in a single basement,” Rios wrote. “We slept on bunk beds made for children that shook and squeaked. We had no privacy whatsoever.”

He spoke with his American coworkers, who he thought had it much better than he did. It turned out that they were being exploited as well: too few hours, too many threats.

“This is not the America we believed in,” he wrote. “We believe America is a beautiful country, where everyone can have respect and fair treatment at work.”

Rios said that he’s tried to speak with Cheung, but the McDonald’s owner wouldn’t hear him. Central Pennsylvania’s Patriot-News‘s requests for comments went unanswered as well.

With no other hope, Rios and his 50-plus other foreign student workers decided to stand up for themselves, organizing a petition through Coworker.com, a workplace-centric site, to attract the attention of McDonald’s CEO Don Thompson. 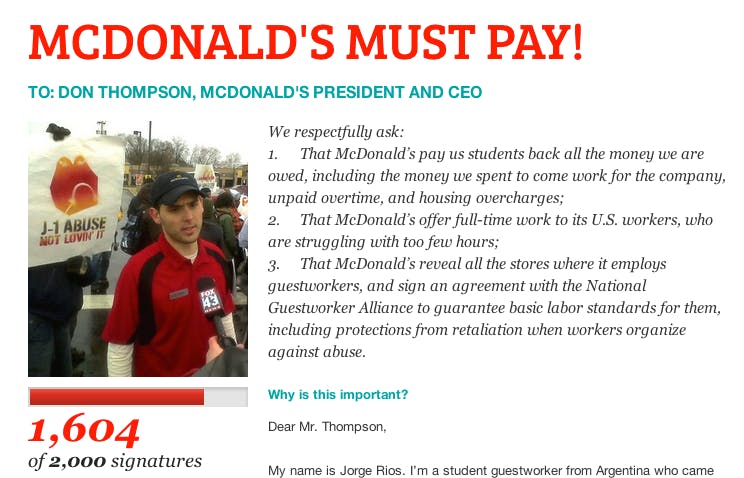 Rios’s petition has already racked up more than 1,6700 signatures. Coworker.com does not guarantee any change will take place, but it does promise exposure—hopefully enough to get on Thompson’s radar.

This is not the America we believe in either, Jorge Rios. America is a beautiful country, where everyone can have respect and fair treatment at work. America is not a place for Andy Cheung.