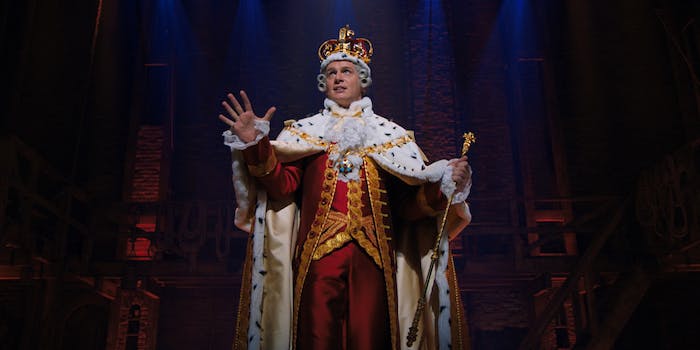 Fans are obsessed with Jonathan Groff’s spitting in ‘Hamilton’

The filmed version of Hamilton with the original Broadway cast is finally streaming on Disney+, which means fans all over the world now have the chance to discover finer details that the cast album can’t convey like the visuals or more subtle emotions. But the biggest thing we’re missing? A whole lot of spit.

That particular detail comes courtesy of Jonathan Groff’s King George III. In Hamilton, King George III is something like a cameo role, a character who doesn’t interact with the rest of the cast but who pops in every so often—usually in response to something that happened on the other side of the ocean—to offer his own insight. He first appears onstage in “You’ll Be Back,” the Beatles-esque breakup song addressed to America after the colonies declared war on Great Britain, but he appears again after the U.S. won the war and after George Washington steps down as president with different variations of that song.

Groff’s rendition of “You’ll Be Back” brings an intensity to the song even as he croons about killing your friends and family “to remind you of my love.” But even amid the pleasant tone much of the song relays, Groff’s King George reminds you that he is not happy about the Revolutionary War at all: George is so mad about it that he spits both words and actual spit in relaying the vitriol embedded in the pop ditty. (Like “And no, don’t change the subject.”)

If you saw Hamilton on the stage and got a seat close enough to the stage, you might’ve have noticed Groff’s tendency to spit up mid-song. But for the rest of us and those only just seeing Hamilton for the first time, it’s completely brand new information brought to us in glorious HD or even 4K quality on our TVs.

“Everyone get your raincoats, #Groffsauce is here!” Lin-Manuel Miranda tweeted during a Hamilton Twitter watch party on Friday. He soon added that “King George’s spit drool is truly transgressive in 2020, mercy me.”

Groff’s spittle did not go unnoticed by those watching and rewatching Hamilton over the three-day weekend.

“The answer is ‘Yes, I would occasionally feel Jonathan Groff’s spittle fall on me during performances,’” Alex Lacamoire, Hamilton’s music director and conductor, wrote. “And you know what? Worth it.”

Groff’s tendency to spit while he’s performing is a feature of his stage presence, one that long predates Hamilton, both in the film and on-stage. He addressed it in a 2009 Vulture interview, noting that “I actually don’t think about it too much, unless I’m in a good scene with someone and I can see it hitting their face. But he also talked about it more recently in regard to his performance in the off-Broadway production of Little Shop of Horrors.

“For the first couple weeks of the run I felt bad, because I’d walk down to the end of the stage in the second song of the show, ‘Skid Row,’ and I can’t help it, I’m just, like, spitting on everyone,” he told Variety last year. “And they’re either enjoying it, or they’re laughing, or they’re holding up their programs to block their face. … I don’t care anymore, but it made me feel self-conscious at first. I’d never been so close to the audience where I was actually seeing the reaction on people’s face while I spat on them!”