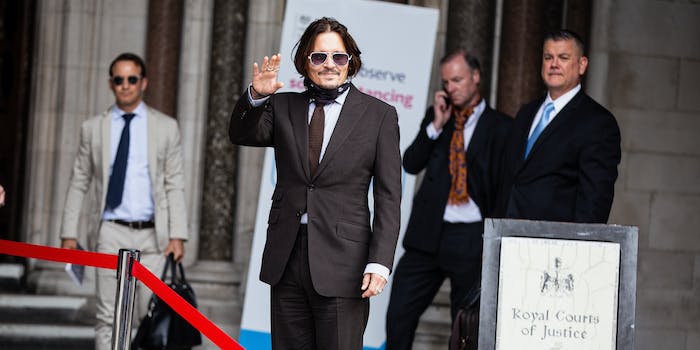 The judge found 'The Sun's allegations of abuse by Depp to be 'substantially true.'

Johnny Depp has lost his defamation case against News Group Newspapers (the publisher of the British tabloid The Sun) for describing him as a “wife-beater” in a U.K. court, but many of Depp’s fans are unhappy with the results.

Andrew Nicol, the judge who wrote the ruling, found that based on the evidence provided in the case, the Sun’s description of Depp was “substantially true.”

“I have reached these conclusions having examined in detail the 14 incidents on which the defendants rely, as well as the over-arching considerations which the claimant submitted I should take into account,” Nicol wrote.

“The Sun has stood up and campaigned for the victims of domestic abuse for over 20 years,” The Sun said in a statement. “Domestic abuse victims must never be silenced and we thank the judge for his careful consideration and thank Amber Heard for her courage in giving evidence to the court.”

The legal battle between Depp and Heard has been ongoing for years. In the months after Heard filed for divorce, she filed a restraining order against Depp, who she said abused her; photographs documenting bruises on Heard’s body that allegedly came from Depp soon leaked online. They eventually settled their divorce and released a joint statement noting that “Neither party has made false accusations for financial gains. There was never an intent of physical or emotional harm.” Heard eventually donated the $7 million she received from the divorce to charity.

Heard wrote about the fallout from those allegations in a 2018 Washington Post op-ed in which she details the reaction she’s received as her divorce played out in the public eye. In the piece, she doesn’t mention Depp by name but has noted that she lost one role, had to endure speculation about whether current roles she held in franchises would be recast, and has received death threats for speaking out. Heard also argued that her treatment was a clear indication of just how far Hollywood would go to protect male abusers. (Depp is currently suing Heard for libel for the op-ed in the U.S., claiming that it led to Disney dropping him from the Pirates of the Caribbean franchise.)

The ruling comes months after hearings took place over the summer that revealed the extent to which abuse was alleged to have taken place during Depp’s marriage to Heard. The Sun argued that its claims were “accurate and true,” and Heard was among those who testified for The Sun and detailed alleged abuse by Depp to the court.

Part of Depp’s argument for the libel charges against The Sun is that Heard was actually the abuser in their relationship. In the hearings, he cited an incident where Heard allegedly sliced Depp’s finger after she hurled a bottle of vodka at him. While Heard did acknowledge that she hit Depp once as an act of defense to protect her sister from Depp, Heard said that Depp cut his own finger in the incident Depp uses to paint Heard as an abuser.

Nicol agreed with Heard’s assertion that Depp likely injured himself, noting the while it’s unclear exactly what caused Depp’s injury, “it may well be that Mr. Depp accidentally cut his finger on a piece of broken glass.”

While many of Depp’s fans have doubted the allegations against the actor for years—some of whom have also cast doubt on Heard’s allegations and painted her as a golddigger—they’re seeing Nicol’s ruling as another injustice.

#JusticeForJohnnyDepp trended on Twitter as Depp’s fans highlighted the disparities that men face when they’re the victims of abuse. They see Nicol’s dismissal of Depp’s allegation as a clear instance of the system failing male domestic violence victims and the ongoing stigma that prevents men from speaking out about the abuse they receive at the hands of their partners. According to the National Coalition Against Domestic Violence, one in nine men “experience severe intimate partner physical violence, intimate partner contact sexual violence, and/or intimate partner stalking.”

Depp is planning to appeal the judge’s ruling.

“This judgment is so flawed that it would be ridiculous for Mr. Depp not to appeal this decision,” Schillings, the U.K.-based law firm representing Depp, said in a statement. “In the meantime, we hope that in contrast to this case, the ongoing libel proceedings in America are equitable.”

Depp’s libel case against Heard in the U.S. is still ongoing.