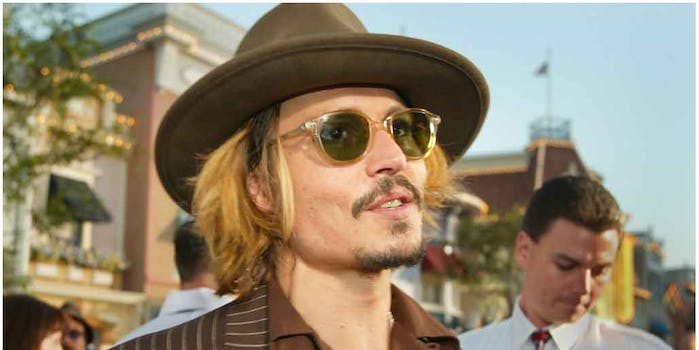 Johnny Depp and Amber Heard reveal a sad truth about marriage in 2015.

Getting married isn’t as simple as it used to be. The tradition of taking your partner’s last name has been the default since the dawn of American bridal culture but has recently started to become more flexible—at least for women. While we now accept a woman hyphenating her last name’s together with her husband’s, or even keeping her last name, the idea of a man changing his name upon marriage is so unusual and so odd that the idea of it is often met with surprised laughter.

Last week, Johnny Depp mentioned to talk show host Jimmy Kimmel that he may take his new wife, Amber Heard’s, last name. Kimmel’s reaction is to chuckle. “That would be a weird thing,” he responds. This reaction is infuriating for two reasons: 1) It completely dismisses Depp’s agency here, and 2) Kimmel’s not at all wrong because, in a culture where 90 percent of women take their husband’s names, it would be weird for Depp to take Heard’s last name.

However, despite the weirdness, other male celebrities, such as Marco Saldana and Jay-Z, have either taken their wives’ last names or chosen a hyphenated version. We balk at the idea of a man taking a woman’s name because the practice of a only a woman changing her name as the result of marriage is considered standard and not worthy of examination. But if we want gender and marriage equity to progress, we have to support the idea that men, and not just women, can change their names upon marriage without ridicule.

Surnames, or family names, are a fairly recent development. In England, the practice began when feudal nobility wanted to differentiate themselves from other groups and ensure that their wealth and lands would be passed down only to direct blood relations. Brides were subsumed into the man’s family, being given his name. Passing down the man’s name was codified into law by Henry VIII as a requirement in order to publicly establish paternity, and America continued this tradition—though we have come to see it as the only option instead of one of a myriad of choices a family may make.

If we want gender and marriage equity to progress, we have to support the idea that men, and not just women, can change their names upon marriage without ridicule.

When you take on someone else’s name, you give up a part of yourself. Anyone entering into a marriage must be prepared to sacrifice some bit of themselves, but only women are expected to make a literal change. We still assume that, in marriage, a woman will benefit from inheriting her husband’s prestige. Getting him to put a ring on it, getting him down the aisle, can be considered the pinnacle of woman’s life. You have a ring, you have his name, you won’t die alone, you now are accepted, you now belong.

Men don’t get quite the same bump for getting married, hence all of the tired “ball-and-chain” jokes you see in 85 percent of all sitcoms. A woman’s honorific is changed upon marriage, from “Miss” to “Mrs.,” while a man’s remains “Mr.” When a man marries, he is supposed to remain the same.

Women are getting married 3.4 years later on average than they did in the 1970s, which means that women are more established in their lives when they first walk down the aisle. Their birth names are associated with numerous professional accomplishments, a social media history, and an adult life. Our culture has accepted that some women may not want to change their name when they get married, but we can’t fathom it if men want to.

However, men take their wives’ last names for many reasons. Time magazine’s Jacob Desjarlais took his wife’s name because, “I always felt a bit of a disconnect with my past and family history. Maybe the name Smith is the beige of last names—there’s no instant cultural team that you can identify with.”

Some men don’t want to take their wives’ last names because they don’t want to give up a part of themselves, reset their professional lives, and become a new person—at least when it comes to the name on their driver’s’ license. Yet this is something women are expected to do.

A woman’s honorific is changed upon marriage, from “Miss” to “Mrs.,” while a man’s remains “Mr.” When a man marries, he is supposed to remain the same.

When I was preparing to get married, I was perplexed about what to do. I loved my name, I was published under my name, and I had a web domain with my name. When I told my husband-to-be that I wanted to keep my name, we were sharing a drink on a patio with a view of Lake Michigan. He paused and looked away and I was instantly nervous. The issue can be so fraught, and I didn’t want to fight. When he turned back, he told me that he understood my reasoning, but also that we planned on having children and he didn’t want me to be an outlier, the one “Norris” in our new family.

I agreed that I also wanted to share a name with my future children. I wanted to be a named member of the new family we would create. I didn’t want to be the problem.

I prepared myself to give in. I was going to go the “easy” route and go to the Social Security Administration; wait in line and the DMV and the bank; and update my name on dozens of forms at my job, my social media account, every single email address, each of my credit cards, my insurance card, and my library card. I practiced signing my new name. I was ready to feel like a stranger to myself each time I see my married name in print—because I’ve had “Norris” 32 years, and then one day, it’s some guy’s name there instead.

But I was willing to do it because it seemed like someone had to bend in order for us to have one whole family name, and tradition indicated that it should be me. And then my husband said, “What if we just picked out a new name? And then we both changed our names? That would be fair.”

I wanted to be a named member of the new family we would create. I didn’t want to be the problem.

And it would be. So we did. When we went to the DMV to update our driver’s licenses with our new names and new address, mine came back correct, but my husband’s still had his old name on it. He had filled out all of the same forms as I did and had indicated the same name change. The DMV official had overlooked it because he hadn’t expected to see such a thing. He had never seen it before.

We need to start expecting to see men changing their names. Marriage is an ever-changing institution, and right now, our assumption of what happens to people’s names when they marry must change as well. It’s a complicated issue and every couple must decide for themselves the best solution for them. So when a man mentions to you, “Oh, we might take on a new name” or “I might take her name,” don’t laugh and say, “That would be a weird thing.” Instead, smile and say, “That would be great.”

Photo via ATempletonPhoto.com/Flickr (CC BY 2.0)