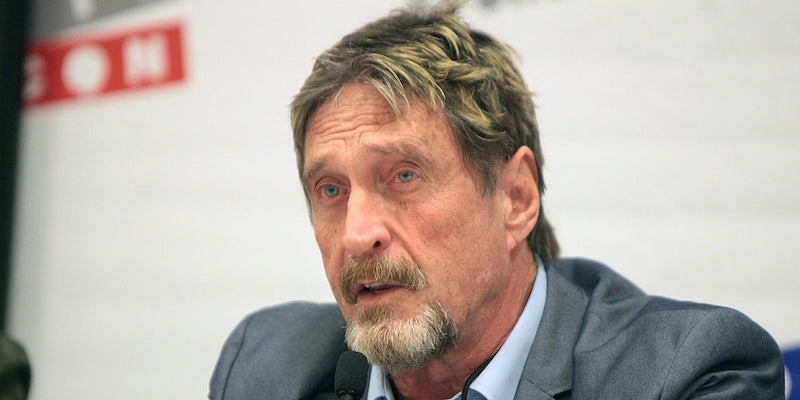 John McAfee has given us the perfect excuse for missing anything.

We’ve all been late for things, forgotten important dates, or missed big events. When this kind of thing happens, as it inevitably does, you have to deal with not only the guilt of missing whatever it is you missed but the stress of coming up with a suitable excuse.

But when the classic excuses of traffic or a faulty alarm just won’t cut it, take a page from cryptocurrency guru, creator of McAfee Antivirus software, and former presidential candidate John McAfee‘s book. Just say your enemies tried to poison you, but you’re just too hard to kill.

“I apologize for my three day absence,” McAfee wrote on Twitter, “but I was unconscious for two days at the Vidant Medical Center in North Carolina and just woke up. My enemies maged [sic] to spike something that i ingested. However, I am more difficult to kill than anyone can possibly imagine. I am back.”

I apologize for my three day absence but I was unconscious for two days at the Vidant Medical Center in North Carolina and just woke up. My enemies maged to spike something that i ingested. However, I am more difficult to kill than anyone can possibly imagine. I am back.

He did not mention who these enemies are, but a second tweet, showing McAfee hooked up to machines in a hospital bed, claims they will soon face the consequences of their actions.

“And for those who did this – You will soon understand the true meaning of wrath.” he tweeted “I know exactly who you are. Youh [sic] had better be gone.”

And for those who did this – You will soon understand the true meaning of wrath. I know exactly who you are. Youh had better be gone. pic.twitter.com/URgz5BtMLF

He finished his tirade with a picture of himself and his wife Janice letting the would-be-assassins know exactly what they think of them.

My wife @theemrsmcafee and I with a message to my incompetent enemies pic.twitter.com/s7rT105OWy

McAfee usually posts to Twitter multiple times a day, so a three-day absence was certainly notable for him. Whether his “enemies” were indeed trying to poison him, or he just ate some bad fish, is open for debate. It’s clear, though, that people on Twitter feel like they’ve just been given the best excuse ever, and they plan to use it for any and all circumstances.

when i forget to reply to a work email for several days https://t.co/7OHuZfgyoS

when a prof asks why you missed a full week of class https://t.co/IiAGQpj6Hb

Realizing I never responded to your text https://t.co/rCNHkoNE13

To the Sunday School class when you miss two Sundays at church … https://t.co/Wfq8tZxfTi

One person also pointed out there was a rather obvious reason why McAfee would survive a poison attack.

McAfee got that antivirus shit in his blood https://t.co/nWCVlr76fi

McAfee was once accused of murder himself, so maybe he does really live in a dangerous world, full of nefarious enemies who constantly threaten his life from shadows. Regardless of what’s actually going on here, we’re sure there’s more drama, and more incredible quotes, just around the bend.