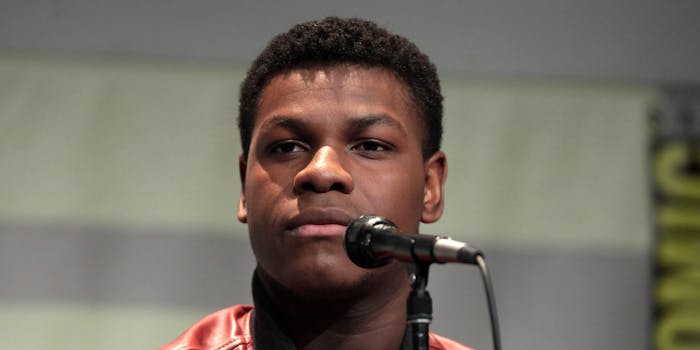 Jo Malone was accused of racism for re-filming his original shot for shot.

Last year John Boyega became the global brand ambassador for Jo Malone, a British perfume company. A fairly typical gig for a famous actor, but Boyega brought his characteristic drive to the project. He directed his own ad campaign, a short film called A London Gent, which was filmed in his home neighborhood in London, and co-stars his friends and family. But instead of just using this video everywhere, Jo Malone decided to copy Boyega’s idea wholesale for its Chinese commercial, replacing him with Chinese actor Liu Haoran.

You can see a comparison between the two ads below, making it very obvious that Jo Malone just filmed a shot-for-shot remake. The brand is being accused of racism for replacing a Black actor to cater to Chinese audiences, a choice that’s being compared to when Disney minimized Boyega’s face on some Chinese Star Wars posters.

Seeing those two commercials beside each other, it’s also pretty obvious that the original is better. The Chinese remake could be advertising anything, whereas John Boyega’s version is rooted in his personality, community, and home in London. And Jo Malone is a London brand. So the new video isn’t just “localizing” the English commercial, it’s erasing John Boyega (and a racially diverse London cast) while attempting to copy his original concept.

Boyega responded by ending his business relationship with Jo Malone, saying that the company had “dismissively traded out his culture” by re-shooting the commercial without his consent. He posted his full statement on Twitter, writing:

“When I joined the brand as their first male global ambassador last year, I created the short film we used to launch the campaign. It won the Fragrance Foundation Virtual awards 2020 for Best Media Campaign. Their decision to replace my campaign in China by using my concepts and substituting a local brand ambassador for me, without either my consent or prior notice, was wrong. The film celebrated my personal story– showcasing my hometown, including my friends and featuring my family. While many brands understandably use a variety of global and local ambassadors , dismissively trading out one’s culture this way is not something I can condone. It’s back to back but I assure you this will be dealt with swiftly. I don’t have time for nonsense. We press on and strong. Stay blessed people.”

Jo Malone has since apologized to Boyega, describing the replacement commercial as “a mistake in the local execution” of the advertising campaign. The brand told the Hollywood Reporter, “John is a tremendous artist with great personal vision and direction. The concept for the film was based on John’s personal experiences and should not have been replicated.” Apparently Liu Haoran wasn’t involved in the creative direction of the Chinese ad, so Jo Malone publicly apologized to him as well.