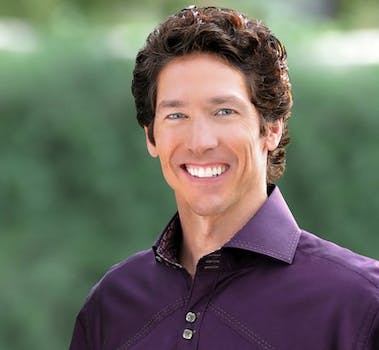 The fakeout opened on Twitter, where an anonymous prankster opened the @PastorJoelOsten account on April 2 and started mirroring Osteen's tweets.

“You’re not really free until you’re free from trying to please everybody.” Joel Osteen once said.

“I am leaving the Christian faith and have resigned as pastor.” For a moment, a mass of devoted Christians thought that Joel Osteen said that, too.

Osteen, the Texas-based mega-pastor whose Lakewood Church in Houston averages more than 43,500 people at every Sunday session, had himself a week to remember last week, when an unknown individual assumed his identity and started spreading rumors around the Internet that he was leaving his Lakewood post.

The fakeout opened on Twitter, where an anonymous prankster opened the @PastorJoelOsten account on April 2 and started mirroring Osteen’s tweets.

“You cannot stop the negative comments,” @PastorJoelOsten wrote, with only one “e” in his last name. “You can’t prevent the negative labels.”

“I am leaving the Christian faith and I have resigned as pastor. Please visit our site at joelostenministries.com for more info,” the account posted. (@PastorJoelOsten was suspended from Twitter during our reporting on this story.)

Clicking on joelostenministries.com directed to a bare-bones website that looked very little like the main Joel Osteen website, which doubles as an online shop and broadcast center.

“As many of you may know, and may have heard in the news recently, many of my sermons have deviated from traditional Christian doctrine,” the individual purporting to be Joel Osteen wrote on the page. “I have been accused of altering the ‘message’ to fit my own doctrine and dogma. Others have accused me of preaching ‘feel good Christianity.’ I have also been accused of profiting greatly from my ministry, with my books and television deals.

“Many of their criticisms are legitimate.”

The writeup went on to explain how the Bible was a “fallible, flawed, highly inconsistent history book that has been altered hundreds of time” and to suggest that “No God worth believing in is going to send you to Hell for not believing in him.”

“In fact,” the writeup continued, “God is more likely to congratulate you upon entering Heaven for doubting, questioning and not believing the religionists and their flimsy facts, demands of blind faith and lack of hard evidence.”

The mysterious hoaxer closed with an amendment about how “We’re also having some trouble transferring ownership of some of our websites,” an explainer for the solitary “e” in Osteen’s name throughout. “I haven’t been able to update everything on all of them,” the hoaxer continued. “I’m dealing with some church leaders who refuse to accept my resignation.”

To increase effect, the hoaxer also orchestrated a 1:30 YouTube video titled “Mega pastor Joel Osteen resigns, rejects Christ, cites ‘lack of faith,’ one complete with phony headlines from places like CNN and Drudge Report. Posted last Tuesday, the video currently has more than 15,000 views, though many of them may be fake; public statistics have been disabled, and only 27 people have chimed in with a comment. (Considering the YouTube community’s penchant for wildly commenting on controversial YouTube videos, we feel comfortable saying that this number is remarkably low.)

On Monday, Lakewood Church officials told the Houston Chronicle that they are aware of the hoax and that Osteen’s departure is a “false rumor.”

Osteen, however, has been even more mum on the subject. Unavailable for comment, the pastor with the wavy coif has remained hellbent on delivering God’s gospel, telling his 1.5 million followers to “Desire the praise of God more than the praise of people. You have an assignment, a purpose, a destiny.”

For one elaborate hoaxer, that assignment might just be messing with Joel Osteen’s head.

The hoaxer did not respond to the Daily Dot’s request for comment.