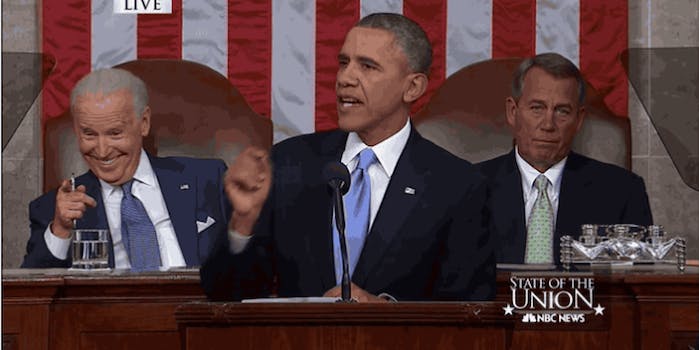 The State of the Union in one priceless Joe Biden GIF

I didn’t tune in to President Obama‘s State of the Union address. I meant to, but I got lost in work and the Knicks were taking up my second screen.

Of course, the full transcript’s available online now, and I could still watch it on YouTube. But why bother? Everything I need to know can be summarized in this one priceless GIF of Vice President Joe Biden, captured by Gawker.

It’s all the assurance I need to know that America is going to pull through. It’s like he recognizes me in the distance, some lost friend whose sudden appearance has made his evening. He points. He smiles. And all of a sudden it doesn’t matter what color tie I’m wearing, because it’s coming off at the afterparty.

If that’s not enough hope for you, how about this effort to reach across the aisle?

A light moment from the State of the Union (Kevin Lamarque/Reuters) pic.twitter.com/gGWx4IlJB3