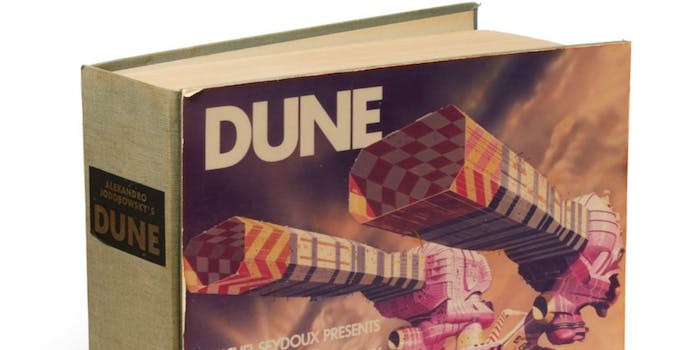 The group purchased the story bible for $3 million.

Over the weekend, the collective known as Spice DAO (Decentralized Autonomous Organization) revealed that it won the auction for a rare copy of Alejandro Jodorowsky’s story bible for Dune, a film that Jodorowsky never made but became influential anyway. (As well as the subject of a documentary.) But the group quickly became the subject of mockery when it revealed its plan for the Dune story bible.

Spice DAO—a cryptocurrency group made up of Dune fans—announced that it paid €2.66 million ($2.9 million at the time) with a token to win the auction, which was well above the estimated €25,000-€35,000 ($28,318-$39,645) range it was expected to sell for. Soban Saqib paid with his own money, but he expects to be reimbursed with some of the funds that Spice DAO raised (in the millions); donating gives members the ability to vote on what happens with the story bible.

Spice DAO’s plans focused both on making the book publicly available, supporting works by fans, and producing “an original animated limited series inspired by the book and sell[ing] it to a streaming service.” The framing of the announcement is that accessibility is the main key.

Spice DAO is vague by what it means by making an original limited animated series that’s inspired by Jodorowsky’s Dune story bible. But it didn’t take long for people to dunk on Spice DAO for thinking that spending nearly $3 million on the story bible gave it control of the rights to adapt Jodorowsky’s Dune. The storyboard isn’t Jodoworsky’s alone, it’s full of copyrights owned by multiple creatives as well as their estates.

Someone even suggested burning the book—one of a handful that exists—after digitally uploading it and turning each page into an NFT—so as to enhance the value of the story bible’s NFTs.

But the group’s pledge to make Jodowosky’s story bible more accessible is a bit suspect because much of the story bible is already free to view online.

In a Medium post from December, Spice DAO acknowledged that it didn’t own the rights to Dune just because it purchased the story bible.

“Jodorowsky’s expansive vision for Dune in some way planted the seeds for nearly every Sci-Fi project over the last 50 years,” it wrote. “While we do not own the IP to Frank Herbert’s masterpiece, we are uniquely positioned with the opportunity to create our own addition to the genre as an homage to the giants who came before us.”

And following the backlash, Spice DAO responded by suggesting that it will “make a totally new animated series with original IP that we create.”

It’s unclear if Spice DAO’s clarification will give people more of an idea of what its future entails, but if the group’s Discord is any indication, Spice DAO’s plans for Jodoworsky’s Dune story bible is just as confusing for them as it is the rest of us.

H/T The Next Web, Kotaku