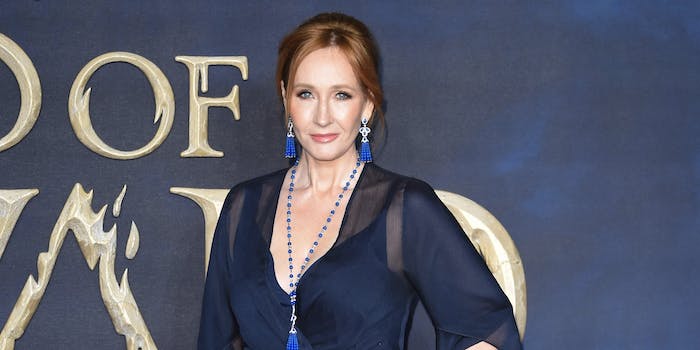 At the beginning of August, RFKHR President Kerry Kennedy (who is also the daughter of Robert F. Kennedy) released a lengthy statement about Rowling’s activity on Twitter (that included both tweets posted and a post liking opposition to a bill banning conversion therapy) and the manifesto that she posted during LGBTQ Pride Month.

Kennedy said that she previously spoke with Rowling, who received the Ripple of Hope in December, about her disappointment over Rowling using her platform to “create a narrative that diminishes the identity of trans and nonbinary people.” Kennedy, citing partnerships with organizations such as Sexual Minorities Uganda and La Red Lésbica Cattrachas Honduras, as well as its ongoing lawsuit against Secretary of State Mike Pompeo, as examples of RFKHR’s history of advocating for trans rights and LGBTQ causes.

“Trans rights are human rights,” Kennedy wrote. “J.K. Rowling’s attacks upon the transgender community are inconsistent with the fundamental beliefs and values of RFK Human Rights and represent a repudiation of my father’s vision. As well, the Universal Declaration of Human Rights states in Article 1: ‘All human beings are born free and equal in dignity and rights…’ Women’s rights are not degraded by the recognition of trans rights. On the contrary: A commitment to human rights demands a commitment to combat discrimination in all its forms.”

Nothing in Kennedy’s statement, which denounces Rowling’s anti-trans sentiments, said anything about rescinding Rowling’s award for her work with her nonprofit charity Lumos. Rowling herself didn’t publicly respond until Aug. 27. While Rowling described receiving the Ripple of Hope award from RFKHR at the time as “one of the highest honours I’ve ever been given at the time,” she’s now returning it, noting that she’s received “thousands of private emails of support” from people who agree with her views on sex and gender—and disagree with RFKHR’s views on the matter.

“Because of the very serious conflict of views between myself and RFKHR, I feel I have no option but to return the Ripple of Hope award bestowed upon me last year,” Rowling wrote. “I am deeply saddened that RFKHR has felt compelled to adopt this stance, but no award or honour, no matter my admiration for the person for whom it was named, means so much to me that I would forfeit the right to follow the dictates of my own conscience.”

After Rowling’s post went live, #IStandWithJKRowling started trending online. The hashtag is filled with people who support Rowling’s decision to stick with her principles and critics voicing their support for trans rights and calling Rowling’s comments transphobic.

For months, fans have distanced themselves from Rowling as Rowling’s views on trans issues have become more widely known. And back in June, several actors from the Harry Potter and Fantastic Beasts franchises have publicly disavowed Rowling’s statements.