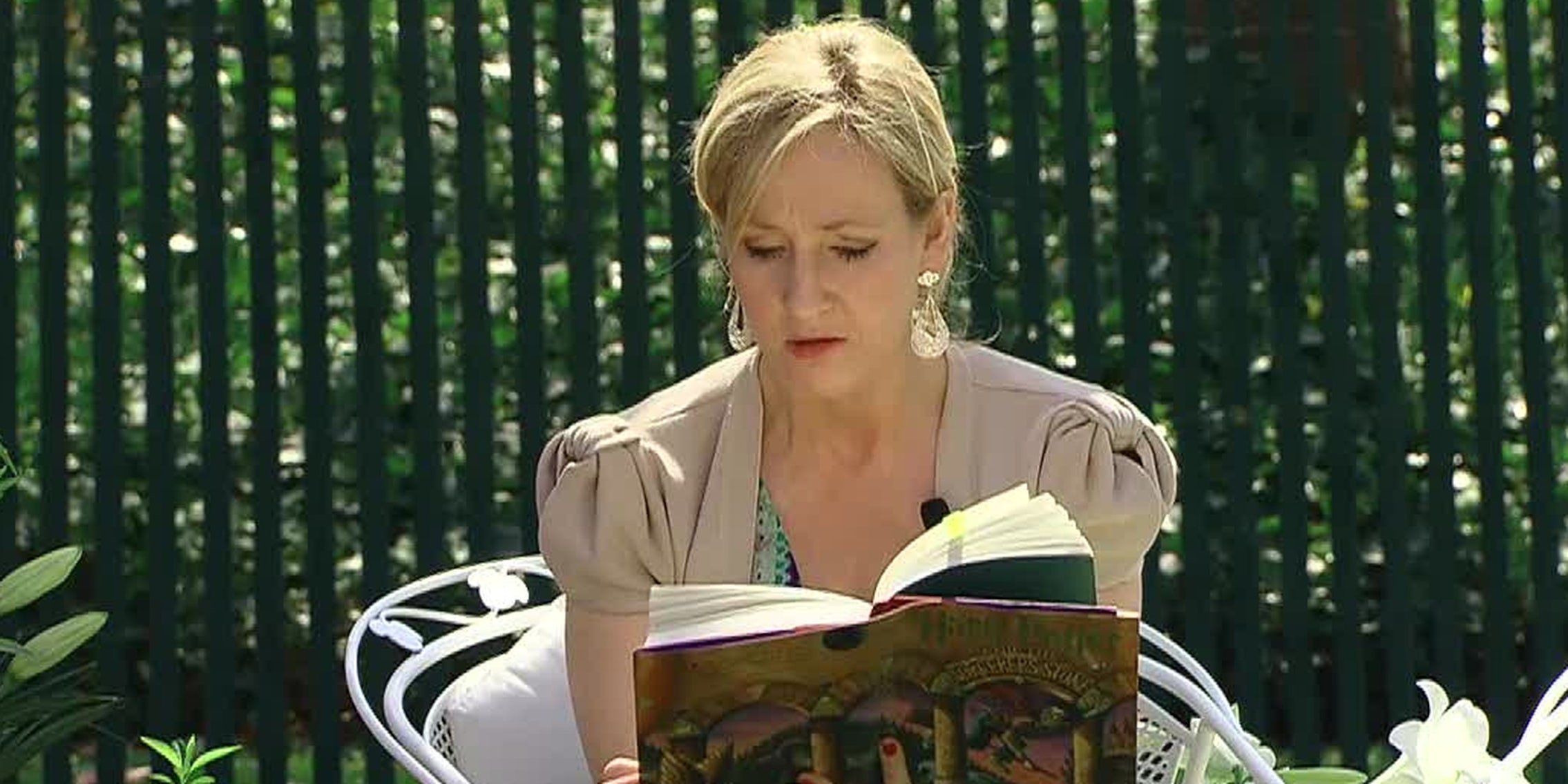 How J.K. Rowling became the next George Lucas

Before this op-ed gets into the sort of discussion that might be called “a major buzzkill,” let’s all take a moment to squeal aloud in unison: J.K. Rowling has written new Harry Potter material again. Since Harry Potter and the Deathly Hallows was published in 2007, and the companion film series wrapped up four years later, fans the world over have craved new reasons to delve back into the universe, new extensions that could keep the world going even after Harry’s story came to a close. Granted, Rowling hasn’t kept completely mum over the past few years; in late 2008, she put out The Tales of Beedle the Bard, a children’s storybook mentioned in the series.

But ever since the launch of the interactive and incredibly elaborate fansite Pottermore two years ago, the question has further been raised: how much is too much? A great many would say that their thirst for more Potterverse has no ceiling, that it’s a universe too rich to exist in limited supply. And it’s through Pottermore that Rowling released this new writing, a brief trifle written in character as embittered gossip columnist Rita Skeeter that checks in with the key characters in their 30s, as they attend the Quidditch World Cup. While it’s heartening to know that Harry’s doing well in his career as an Auror and that Viktor Krum is still going strong as Bulgaria’s Seeker, it begs the question anew of when exactly it’s time for a creator to walk away from their creation—and whether they really can these days.

Upon the announcement of a new Potter-affiliated film franchise last year, based on the canonical textbook Fantastic Beasts and Where To Find Them, the Daily Dot’s own Nico Lang acknowledged that it’s becoming harder every year for artists to simply create something and let it exist as is. In a Thought Catalog article discussing whether revisiting the universe as a new film trilogy, he wrote, “I wonder if she should—and whether this universe needs more building. The Harry Potter series gave us seven novels, and the last novel, Deathly Hallows, meticulously gave fans every piece of closure they could want. Rowling couldn’t have done a better job if she wrapped the ending in a bow. What this does is continue to delay closure for fans who have grown attached to the series in the same way the author has.”

Rowling has always been diligent about understanding and respecting the importance of the universe she’s built to its fans, and it’s not particularly hard to argue that Fantastic Beasts may simply be an exciting way to fill in some blanks. But the longer Rowling lingers, the harder it becomes to shake the feeling that she might end up sequestered in this universe. (Yes, she’s written other novels and they’ve sold well, but consider how often they’re talked about after the initial buzz of new Rowling material died down.) It’s reminiscent of Peter Jackson, whose Hobbit movies have received only a fraction of the love the Lord of the Rings trilogy did. You come to love a world enough, and you never want to leave. It’s a principle of creation every bit as much as it is fandom.

Such cases inevitably lead back to talk of George Lucas. And while Rowling hasn’t done nearly as much damage to the Potterverse as Lucas has done to the Star Wars films––and virtually can’t unless Hayden Christensen suddenly stands in as Neville Longbottom in the Deathly Hallows films a couple decades from now––there are certain disconcerting parallels. For both, the changes started small. Rowling retroactively declared in 2007 how Albus Dumbledore had been gay throughout the novels, which colors some small aspects in a different light but generally leaves the source material unaltered. Likewise, when Lucas re-released the original Star Wars trilogy in theaters in the late ‘90s, some of the effects were updated to reflect modern technology.

But while it’s fine to return to the universe and make small changes, it’s another to start attempting to change the ways in which fans interpret it. For Lucas, that meant Greedo shooting first, which dovetailed into a hackneyed new trilogy that introduced midichlorians, Jake Lloyd, and a great many other things that simply didn’t need to exist; it essentially attempted to reclaim Star Wars from the fans that made it a phenomenon, ensuring that it existed in Lucas’ likeness. That’s to say nothing of the recent memory wipe of the franchise, the result of Lucas signing off on so much tertiary canon in book form and elsewhere that the mythology was left too Byzantine for an outsider (or, in this case, J.J. Abrams) to enter the fray at all.

For Rowling, though her alterations have been markedly more minor than Lucas’, they ultimately have a similar effect. Earlier this year, she noted that she feels that Hermione Granger, the series’ most prominent female hero, should have ended up married to Harry instead of Ron Weasley. And the new Pottermore material, while innocuous enough, teases out the possibilities of marital dischord in this vein between Harry and Ginny Weasley, his canonical wife. Granted, the use of Skeeter as a proxy suggests that this could all be the work of an unreliable narrator, but it continues the thread of changes to the story. Additionally, the Skeeter post acknowledges that Hermione went on to become a working mother of two, a description that’s both problematic (inasmuch as Hermione is one of the preeminent literary feminist icons of her generation, and apparently has gone on in life to “lean in”) and, frankly, more than a bit anti-climactic.

But these are the hazards of building a pop cultural universe in the modern era. Fandoms have taken to the Internet for all manner of ends––from communing with fellow fans to obsessing over minutiae to creating works of fanfiction that continue the work long after the original text ended and send it into a myriad of new directions. And in the case of Potter, not only can you go to Universal Studios and actually live within Potter’s world, but Pottermore offers a new paradigm for fans, one in which the story is continually nurtured by its creator, allowing fan and artist to continue talking and sharing and imagining and even creating together. But it also means that there’s no finality, no determined point where the story must end and live on through its legacy from there. And that might not be a particularly good thing.

To be fair, the issue of instant gratification in culture isn’t nearly limited to Harry Potter, but it serves as an interesting example precisely because its fans share such an intimate connection with it. For many (this writer included), the rise to prominence and progression of the Potter series directly coincided with their maturation from children into adults, and it stands to reason that it might be difficult to let it go. But it’s hard to argue that part of art is finality. The debate and continual reinterpretation is what keeps it alive, not a continuous stream of canon that ensures nobody ever has to feel sad about a thing they enjoyed coming to a close.

Increasingly, audiences have tried to rally against this, to lay claim over even the creators of pop cultural texts to their favorite stories. This week, George R.R. Martin had to harshly rebuke fans who demand that he write his books faster because of his age and weight: “I find that question pretty offensive, frankly, when people start speculating about my death and my health, so fuck you to those people.” A few years ago, he also addressed fans demanding that he write faster, slightly less colorfully: “Some of you are angry that I watch football during the fall…some of you hate my other projects…some of you don’t want me attending conventions, teaching workshops, touring and doing promo, or visiting places like Spain and Portugal (last year) or Finland (this year). More wasting time, when I should be home working on A Dance with Dragons. After all, as some of you like to point out in your emails, I am 60 years old and fat, and you don’t want me to ‘pull a Robert Jordan’ on you and deny you your book.”

In Martin’s case, his notoriously slow creative process is what irks fans. But it’s a testament to the entitlement fans now feel in an era where artists and creative minds are expected, rather than encouraged, to be available to audiences that it’s not enough to just appreciate a text for what it is. There has to be more of it, faster, and most importantly on demand. To circle back to Rowling, Pottermore is a more productive way of bridging this gap, but it also helps to foster this mentality, to encourage fans to demand that the things they enjoy never end.

Sometimes, pop culture requires a point of termination. Particularly in an era where the fan entitlement mentality has led to the proliferation of sequels and reboots and tied-in side projects in film and TV and literature alike, it’s important to remember that most pop culture functions much like a delicious meal; if done well, you should be left wanting more, but that doesn’t mean that getting more is actually a good idea. An interesting case study in this is Community, Dan Harmon’s long-embattled meta-sitcom. The show was recently cancelled by NBC after multiple stops and starts, the show’s five-season run heavily indebted to fan interest and active demand for more. Now, the show has been picked up by Yahoo! for its sixth season.

As somebody with an innate understanding of how pop culture works and the ever-shifting roles fans play in it, Harmon initially expressed concern over the show continuing in the wake of the NBC cancellation: “If you want to know the God’s honest truth, part of my “eh” [regarding the announcement] was coming from the unsettling thought of your passion for campaigns being once again exploited by this rather unfair, somewhat backward system, one that now treats you like it’s your responsibility to keep a show alive, like a corporation is doing you a favor by feeding you low grade opiate through a regulated tube. Like you owe them an apology when they can’t measure or monetize you to their satisfaction. You deserve better.”

Though active fan participation has become a subject of much conversation everywhere from sites like this to academia, it’s important to remember that it’s also probably being discussed in a boardroom somewhere as part of a brand strategy, as Harmon notes. Universes like the ones offered by Harry Potter or Community or other niche creations live and die by the people who care so deeply about them, but at the end of the day they’re also commercial products, products owned by people who see fans’ relentless devotion as a market to be tapped. And though fans might want to take ownership of those things, there is still an inherent wall preventing them from fully doing so. Sometimes it’s up to the creator to say when, because with every passing day it becomes clearer that nobody else really has to, or seems to want to.