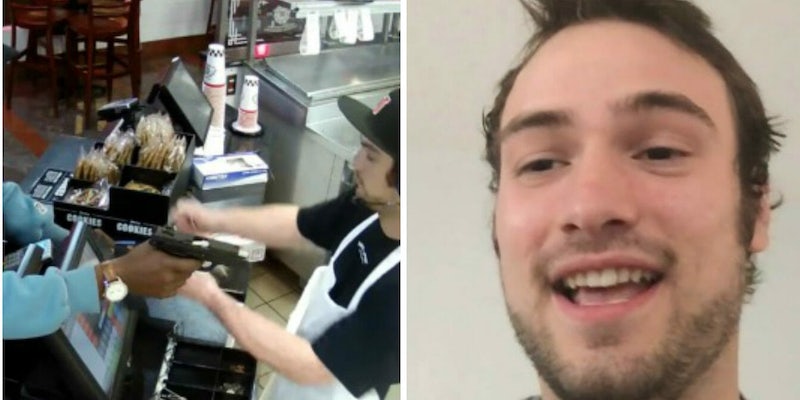 This dude was cooler than cool.

In the past day or so, the internet has fallen in love with this Jimmy John’s cashier who cool-headedly shook off a robbery attempt of his store and a gun in his face like he was watching an episode of Cops on TV.

The cashier, a dude from Kansas City named Tuker Murray, was cooler than cool, and more than anything else, he seemed annoyed at the alleger robber. Perhaps that’s because he was so unimpressed with the gun-wielding man’s performance.

In an interview with TMZ, Murray said the robbery was “amateur hour” and called the alleged robber a “bitch.”

“I wasn’t really that worried about it to be honest,” Murray told the website. “He didn’t seem that intimidating, I guess. I just wasn’t that scared.”

“Then,” Murray said, “he proceeded to try to rob me like a bitch.”

According to Fox 4 KC, Rayford was on parole for armed robbery, and according to court documents, he told police he had been committing robberies to pay off a crack cocaine debt. TMZ reported Rayford made off with $280 from the register.

Murray said he was surprised when a detective told him this wasn’t Rayford’s first robbery attempt.

“He was all over the counter, off balance,” Murray told TMZ. “It was like amateur hour.”