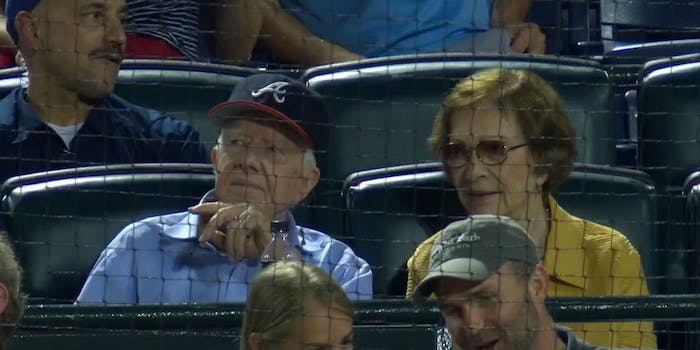 When you're on the Kiss Cam, there's only one thing to do.

Former President Jimmy Carter has been battling cancer that has spread to his brain, but that didn’t stop him and his wife Rosalynn from attending an Atlanta Braves game—or playing to the crowd.

A camera operator at Thursday night’s game thought it would be funny to put the 39th president and his wife on the Kiss Cam. That led Carter, seemingly as spry as ever, to gamely lock lips with Rosalynn.

The crowd seemed to love it.

Ever since announcing that melanoma had spread to four spots in his brain, Carter has tried to keep up his normal routine. He still teaches Sunday school in Plains, Georgia; participates in town-hall events as a professor at Emory University; and shares his opinions on current events in the Middle East.

And Carter, who was the governor of Georgia before serving as president, also still attends Braves games.

It’s nice to see that, after 69 years of marriage, Mr. and Mrs. Carter aren’t shy about public displays of affection.