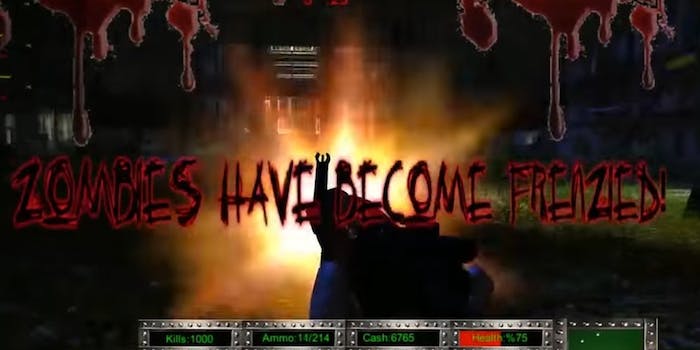 He gave their game a bad review, but their lawsuit is even worse.

Jim Sterling is a viciously funny video game reviewer whose work has appeared on YouTube and The Escapist. Digital Homicide is a company whose low-quality games Sterling has repeatedly skewered. They’re somewhat famous for not taking criticism very gracefully, and their red-faced responses to Sterling have allowed him to exploit them as a seemingly limitless source of comedy.

Now, more than a year after the feud began, one of the two brothers who runs Digital Homicide has filed a self-authored lawsuit against Sterling, claiming millions of dollars in losses. It is a poorly-punctuated rant and delightful to read, but to fully enjoy it, you’re going to need some background.

In November 2014, Sterling dropped a scathing 10-minute review of The Slaughtering Grounds, an amateurish first-person shooter that Digital Homicide (a.k.a. Imminent Uprising) released through Valve’s Steam marketplace. All 10 minutes are worth watching, truly. Sterling took each confusing, depressing, and ugly aspect of the game apart in detail as he struggled in vain to find ammo.

The review, although seemingly fair—hell, you can see that Sterling formed his opinion by actually playing Slaughtering Grounds for at least 10 minutes—didn’t sit well with Digital Homicide’s Romine brothers.

They released a review of Sterling’s review, but because he is an Internet comedy professional, and they make a living building games out of pieces purchased from asset stores, it did not go well for them.

At some point, they also had his original playthrough of Slaughtering Grounds temporarily removed from YouTube by filing a copyright claim.

Here’s a recap of the whole thing, from Sterling’s perspective:

The struggle came to a head in July 2005, more than half a year after it started, when Sterling had the Romine brothers on his “Podquisition” podcast at their request. His description fairly characterizes what you’ll hear as Digital Homicide ties its own noose over the course of a nearly two-hour interview:

Listen as Digital Homicide talks over me, attempts to use mad scientist tropes to prove I’m a bad person, tries to invent a conspiracy theory about me, and claims there’s no difference between The Jimquisition and The Slaughtering Grounds.

After that, it seemed like the rivalry, such as it was, had died. But now, in the year two thousand and sixteen, Digital Homicide’s James Romine has filed a libel suit against Jim Sterling, alleging over $10 million in damages.

The most interesting aspect of the suit is that, rather than hiring an attorney, Romine filed the suit pro se—he wrote the complaint himself. If you don’t know how anything about Valve’s Steam store, it will make very little sense.

The gist is this, though: After being repeatedly drubbed in public by Sterling, Digital Homicide apparently changed its name to Every Click Counts (ECC). But it turns out ECC was also the name of a Poland-based developer that sells games on Steam.

This came to Sterling’s attention after the Polish ECC wrote to him to explain they had nothing to do with two of the Romines’ games that Sterling had just reviewed, Devil’s Share and Intergalactic Hitman.

James Romine claims that after Sterling’s article about the two different ECC’s, Valve shut down his Every Click Counts account and stopped selling the studio’s handful of games. He describes begging Steam to let him keep the account, and claims the loss of “over six thousand hours of coding and model work” and millions of dollars in income.

Romine also alleges that Sterling libeled him and his brother by calling them “as sly as the Wet Bandits” from Home Alone as well as the “Romino brothers,” which Romine somehow interprets as a reference to originized crime. ¯_(ツ)_/¯

I’m trying to imagine a judge reading all of these arcane mentions of Steam product keys and Stream’s Greenlight programs, with almost no explanation provided as a guide, and wondering why Romine didn’t just hire a lawyer. It would have resulted in a far more coherent complaint.

And, according to Romine’s own logic, it would have been a lot cheaper: He’s asking for $800,000 for the 1,000 hours he allegedly spent researching law to write this labyrinthine legal document, claiming he bills at $800 per hour. For that kind of time and money, maybe hire someone who’s actually licensed to practice law?

According to Kotaku, the Romines did launch a crowdfunding campaign for their legal fees but had to take it down after Sterling fans trolled it.

Romine is also demanding that Sterling make an apology video and stick it to the front of his YouTube channel page for a minimum of five years. OK, sure. Sterling’s response?

I have nothing yet to say about any legal situations. In unrelated news I am in a very confident mood today.