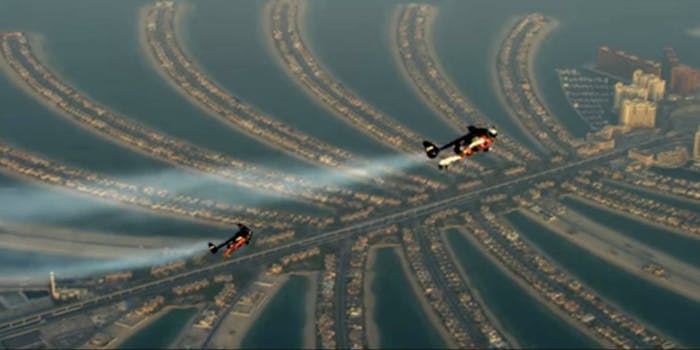 An unreal sight to see.

Here is what daredevil duo Yves Rossy and Vince Reffet look like as they cut up the skies over Dubai in jet-powered wings (basically, jetpacks):

Rossy is known the world around for his high-altitude hijinks, having flown in formation with an airplane in December. Here’s what that looked like.

This time flying with his protege Riffet, he carves wicked arcs through over Dubai to showcase what these wings are capable of. This is the first time that jet-powered wings have been operated so closely together at these speeds, and it looks like a transcendental experience.

The gear required for such stunts weighs 110 pounds, begins operation at a height around of 7,000 feet, and accelerates to 120 miles per hour. Wild.