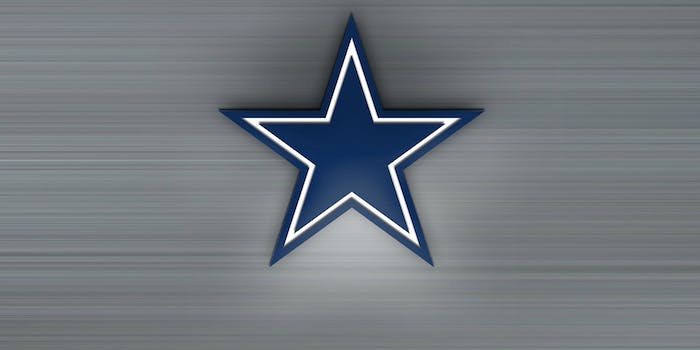 Many of the questions lambasted the Cowboys' employment of Greg Hardy.

The Dallas Cowboys have had major problems this year. They lost starting quarterback Tony Romo for seven games, and as a result, the team is 3-7 and almost certainly won’t make the playoffs. They’re still making silly player personnel decisions. And perhaps most importantly, they still employ Greg Hardy and all of his problems.

So, there’s no telling why anybody thought that starting a Twitter question-and-answer session for Cowboys owner Jerry Jones—one of the most divisive owners in all of sports — would be a good idea. But #AskJerryJones was born on Wednesday, and predictably, it did not go well.

All right, NFL Network, let’s give it a shot.

COMING UP:
Owner, President & GM of the @dallascowboys will be LIVE on @NFLHQ ! Tweet your questions #AskJerryJones

Sure, some people genuinely wanted to converse with Jones and ask him real questions.

Do you have any superstitions on game day? Lucky socks, lucky meal, lucky tie? #AskJerryJones

Most, though, didn’t. Instead, they were more interested in trolling Jones.

#askjerryjones do you like having woman beaters on your team?

#AskJerryJones if Jeffrey Dahmer would have never been murdered in jail do you think he would have turned out as an elite slot receiver?

#AskJerryJones which do you prefer more, the spread offense or aggravated assault

Which prisons do you plan on visiting in the off-season looking for new players? #AskJerryJones

#AskJerryJones if you could go back in time and murder baby Hitler, would you do it or sign him as a defensive back?

Overall, it was quite a day for Jones and everybody who wanted to ask him a question.

The best worst idea ever: #AskJerryJones.