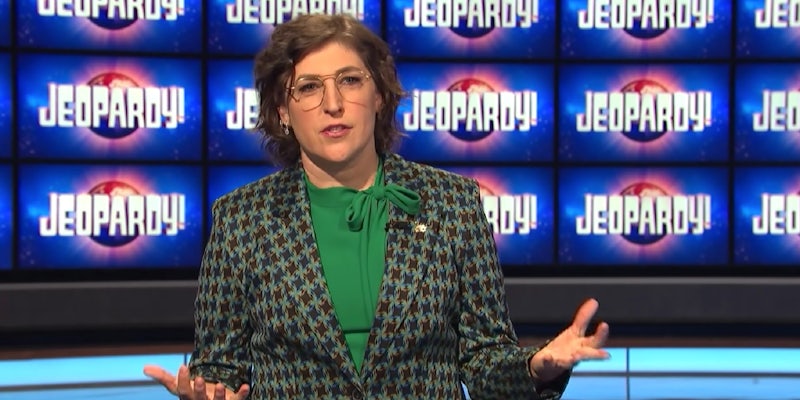 People want to oust ‘Jeopardy!’ host Mayim Bialik over past comments about vaccines and C-sections

Twitter users were divided over Bialik's past, with some saying she's changed and others asserting it's not enough.

Shortly after being named the first daytime guest host of Jeopardy! after Mike Richards’s exit, Mayim Bialik is under fire for her own controversial past. Bialik, best known for starring in The Big Bang Theory, has reportedly expressed contentious views about C-sections and vaccines, and folks on Twitter aren’t having it.

The controversy comes only days after replacement Jeopardy! host Mike Richards stepped down from his position with the TV show following a Ringer report that resurfaced old podcasts in which Richards made offensive comments about women, Asian people, and Jewish people.

After Bialik was initially selected as the primetime and spinoff Jeopardy! host in early August, she received criticism for previously discussing her vaccine hesitancy in her 2012 book Beyond the Sling.

“We made an informed decision not to vaccinate our children,” Bialik reportedly wrote in her parenting guide, “but this is a very personal decision that should be made only after sufficient research, which today is within reach of every parent who seeks to learn about their child’s health regardless of their medical knowledge or educational status.”

But in 2015, Bialik tweeted, “dispelling rumors abt my stance on vaccines. i’m not anti. my kids are vaccinated. so much anger and hysteria. i hope this clears things up.”

Amid the COVID-19 pandemic, her supposedly anti-vax history garnered renewed backlash, but a representative for Bialik clarified her vaccine status to The Wrap: “She has been fully vaccinated for the COVID-19 virus and is not at all an anti-vaxxer.”

“This year I’m gonna do something I literally haven’t done in 30 years: I’m gonna get a vaccine. I know! And guess what? I’m actually gonna get two,” she said.

However, she did reiterate in the video that she is a “skeptic” and “critical” of “Big Pharma”, vaccine schedules, and vaccine ingredients.

But Bialik has come under fire for more than just her previous comments on vaccines. Twitter user @EoinHiggins_ tweeted a screenshot from a Self article, saying, “New Jeopardy! host Mayim Bialik has some interesting views on C-sections.”

The tweet implied that Bialik believes that some women weren’t meant to have babies if they couldn’t be birthed “the holistic way.”

“There are those among us who believe that if the baby can’t survive a home labor, then it is OK for it to pass peacefully,” Bialik said. “I do not subscribe to this, but I know that some feel that… if a baby cannot make it through birth, it is not favored evolutionarily.”

Some people were quick to defend Bialik and point out that she added, “I do not subscribe to this.” But others felt it was insensitive of her to bring it up in the first place.

“She also basically said that Harvey Weinstein’s victims brought it on themselves by being so hot and dressing so immodestly,” Twitter user @alyssamarleneb wrote.

The Daily Dot previously reported on the backlash to Bialik’s 2017 op-ed in the New York Times, titled, “Being a Feminist in Harvey Weinstein’s World.” The essay received harsh criticism at the time, as critics claimed she victim blamed, congratulated herself for her own “modesty,” and misrepresented rape culture.

Twitter user @KHuysmanz also referenced the NYT op-ed, tweeting screenshots from it and adding, “She also said she doesn’t get sexually assaulted because of how she dresses and how smart she acts.”

Several other Twitter users pointed out that Bialik seems to have abandoned some of her old viewpoints, but for others, that’s not enough to erase her past. For now, Bialik remains in her position at Jeopardy!, filming her first episodes as daytime guest host this week.