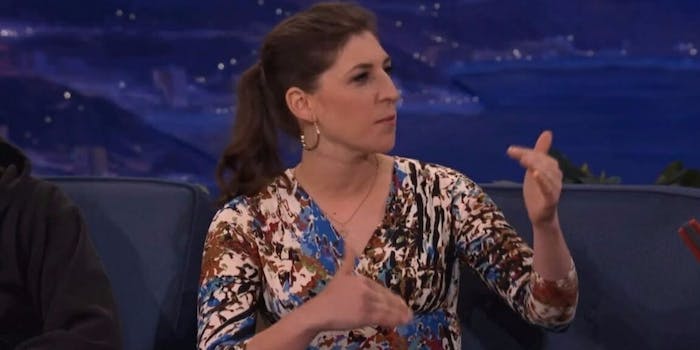 Bialik has since responded to the criticism.

After a week of actresses speaking out against the predatory actions of Harvey Weinstein and other powerful Hollywood men, actress Mayim Bialik published an op-ed for the New York Times in which she wrote about her experiences as a woman in the industry.

Having entered the TV world as an 11-year-old, she said she wasn’t surprised by the Weinstein allegations. The Big Bang Theory star also wrote about her experiences of “constantly being teased” over her looks and that she always made conservative choices as an actress, in part, because her parents were skeptical of the industry. She then went on to link her appearance and her choice in clothing to her having had almost no experience with “men asking me to meetings in their hotel rooms.”

“I still make choices every day as a 41-year-old actress that I think of as self-protecting and wise. I have decided that my sexual self is best reserved for private situations with those I am most intimate with. I dress modestly. I don’t act flirtatiously with men as a policy.

“In a perfect world, women should be free to act however they want. But our world isn’t perfect. Nothing—absolutely nothing—excuses men for assaulting or abusing women. But we can’t be naïve about the culture we live in.”

It is this passage that many women have found problematic. On social media, she has been taken to task for her perceived victim-blaming, her condescension, and her seeming lack of awareness that you can be sexually harassed or assaulted no matter what you wear or how attractive you are.

"I have decided that my sexual self is best reserved for private situations with those I am most intimate with. I dress modestly." This is disgusting. @missmayim is placing blame on victims and forgetting that rape and assault are about power, not about desire. https://t.co/gVFoct2QyQ

Mayim Bialik's NYT op-ed is 🚮. The "Pence rule" is 🚮. Blaming women's or victim's choices for Weinstein or any predator is 🚮.

Hi @missmayim. This is me at age 14, the age when I experienced sexual harassment for the first time.
This is how I looked and dressed. pic.twitter.com/v05F7S3SBM

.@missmayim I have to say I was dressed non provocatively at 12 walking home from school when men masturbated at me. It's not the clothes.

Mayim Bialik missed the perfect opportunity to call out men in Hollywood. Instead she blames women. https://t.co/kBJPGXhwI1

The Big Bang Theory is one of the most misogynistic things on television. Just bc the predators are nerd men, doesn't make it less egregious

While Bialik considers herself a feminist, it is her narrow definition of what constitutes one that that has left many to see her as pompous and judgmental of other women. In the past, she has called attachment parenting the “normal” way to mother and has shut down those who question Zionism’s place in feminism.

On Saturday night, Bialik responded to the controversy, writing that her words had been taken out of context. She also vowed to continue the discussion.