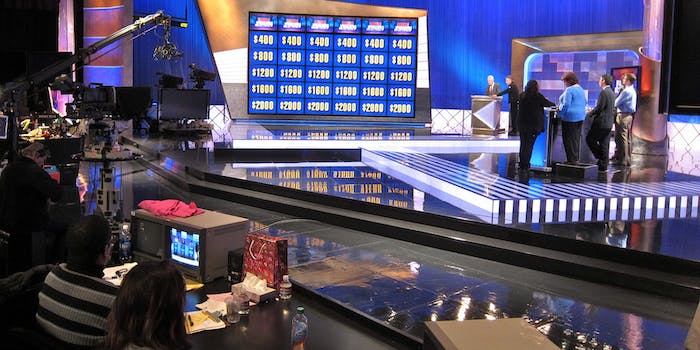 ‘Jeopardy’ settles the GIF pronunciation debate once and for all

Trebek decided to give his contestants a little taste of 2013.

Trebek’s furrowed brow began to sweat. He thought he knew all the world’s answers, from Churchill to The Hills. But there was one domain he still couldn’t fully grasp: the Internet. The weight of it choked him.

“There’s an image format, like a photo,” said the bird, “but it moves. People in media share versions of it all day. But because no one speaks in this world, only types, a debate rages over how to pronounce it.”

Trebek had not heard of this “GIF.” He did not know the pain that was caused by endless arguments over that one letter, nor did he understand the social anxiety of feeling the word rise in your throat and causing you to stutter mid-sentence, second-guessing your tongue placement, wondering how the person across from you pronounces “GIF.” Your career was on the line. It was a dangerous time.

Trebek liked golf. He dreamed of greens in the Poconos, in Pennsylvania.

He decided to give his contestants a little taste of “2013.” If those kids couldn’t decide how to say it, he’d decide for them. This would settle things once and for all.

That magnificent bastard. RT @jordansarge: aaaaaaand jeopardy is helping to close out 2013 the right way pic.twitter.com/k5XYrJfaVH

And so it was.

Later, Trebek saw something unusual: People were taking photos of their televisions. They were broadcasting the photos over Twitter. What strange times these were!

Trebek looked at himself in the mirror. He felt tired. He took a photo of himself, tweeted it. He stripped down to a towel and tried again. It didn’t help. Nothing could. The year was coming to a close.

Trebek opened Facebook. He saw a dog, its thoughts rendered in Comic Sans. The image had a name. D-O-G-E.

He didn’t know how to say it.