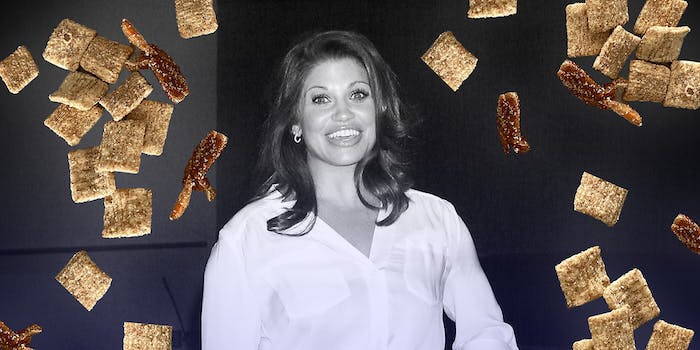 He has rapped under 'Hot Karl' and is married to Danielle Fishel Karp.

Over the past couple of days, the internet has been captivated by the ongoing saga of Jensen Karp after his photos of the shrimp tails he found in his box of Cinnamon Toast Crunch went viral. But as Karp’s story unfolded, which included more horrific photos of rope and what might be rat poop and a bit of gaslighting from Cinnamon Toast Crunch’s Twitter account, more people became aware of Karp’s past connections, shocking them in the process.

If you stumbled upon Karp’s ongoing chronicle of the Cinnamon Toast Crunch-covered shrimp tails and didn’t know who he was, you might not have thought anything of it. Or it’s possible that you knew him from his comedy, his podcasts, or his book. But a throwaway line in many of the write-ups of Karp’s tweets introduced a bigger connection to many people’s pop culture nostalgia.

“Mr. Karp, a 41-year-old comedian and writer in Los Angeles, took a picture of the contents and sent it to his wife, Danielle Fishel Karp, who played Topanga Lawrence-Matthews on ‘Boy Meets World,’” the New York Times write-up of Karp’s saga stated.

Nothing stated in that paragraph is new information—in one of the tweets, Karp mentions Fishel but not by name. Fishel goes by “Danielle Fishel Karp” on social media. Their engagement made headlines, and when the duo married in 2018, Fishel shared a photo on Instagram. But if you had no idea who Karp was before the Cinnamon Toast Crunch saga, it’ll likely come as a big shock that the man who said he found shrimp tails in a cereal bag is married to the actress best known for playing Topanga in Boy Meets World.

And that’s before you get into the many coincidentally fishy connections both Karp and Fishel’s names bring out, which even shocked Karp a little.

But as people discovered Karp’s marriage to Fishel, Karp’s past as a rapper who went by the name Hot Karl also came to light.

But given that not everyone knows who Hot Karl is, it led to people thinking that Hot Karl was in reference to Minecraft streamer Karl Jacobs and even Karl Marx; the latter even trended on Twitter under “Music.”

But to turn the saga on its head yet again, it turns out that in March 2020, Fishel made a sponsored Twitter post where she recommended Cinnamon Toast Crunch flavored Coffeemate and talked about how much she loved the cereal. But as she explained when someone pointed out the hypocrisy of reporting the cereal when she was touted Cinnamon Toast Crunch-flavored creamer, it’s not exactly the same.

“I was never sponsored by CTC,” Fishel replied. “That was an ad for coffeemate when they did a collab with CTC. We were BIG FANS until we found shrimp tails yesterday.”