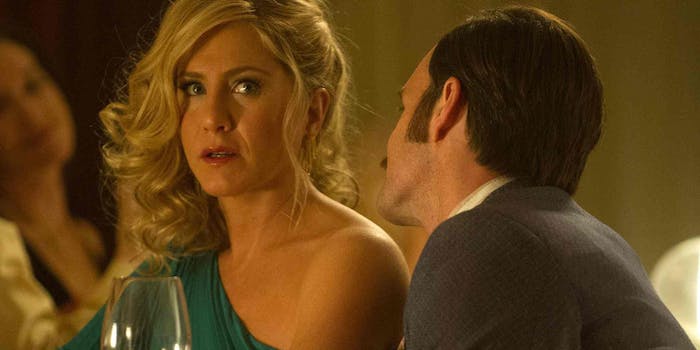 It's time to let it go already.

Jennifer Aniston is sick of your crap.

Or at least, she’s sick of the crap people keep asking her about Angelina Jolie. The Cake actress recently mentioned to Entertainment Tonight that she’s pretty over getting questions about her ex-husband’s current partner, telling them, “I think that’s slowly coming to an end. I really do.” She also praised Jolie’s new film, Unbroken: “I mean, that movie is so beautiful and wonderful and she did such a gorgeous job. I think that it’s time people stop with that petty B.S. and just start celebrating great work… It’s just tiresome and old.”

Aniston is right, of course. Much like the speculation over her womb, the obsession over this feud doesn’t amount to anything more than “petty B.S.” And what makes it worse is the obvious “catty women” stereotypes the media is playing into by engaging in it.

Instead of a successful, powerful woman with an award-nominated movie out, Jennifer Aniston is too often just the girl who married a famous actor one time.

However, that Aniston is speaking out about it in this matter is significant. Aniston’s comments come at the tail end of a year in which women have been working to redefine the sexist media tropes that box them in; instead of a successful, powerful woman with an award-nominated movie out, Jennifer Aniston is too often just the girl who married a famous actor one time. And by pushing back against that narrative, she’s helping bring 2014’s celebrated “year of feminism” into 2015.

Last year was marked by powerful women speaking on. From Emma Watson’s UN speech on gender equality to Jennifer Lawrence reclaiming her role in Celebgate by referring to the incident as a sex crime, 2014 was a year in which women refused to be silent. Ten years’ ago, these actresses’ publicists might’ve told them to “ease up” or “stay quiet,” and they might’ve listened. They might’ve followed the notion that a woman speaking her mind risks being branded “difficult” or “unlikable,” but not today. It sounds like a small thing, but in some ways, it’s actually a huge accomplishment. These women have refused to let Hollywood shape their destinies, which is a marked feat, considering what a male-dominated world the industry is.

It’s telling that if you look at the trajectory of outspoken women throughout Hollywood history, the industry is always quick to turn on them. As the now infamous “cool girl” essay from BuzzFeed’s Anne Helen Petersen brilliantly pointed out, people only seem to want to hear female movie stars speak their mind in small doses. Petersen details silent era cool girl Clara Bow’s public fall from grace, and Jane Fonda’s transformation from perceived Hollywood cool girl of the ‘60s to a radical firebrand in the ‘70s; she warrants that the studio era’s Carole Lombard only escaped the trope by dying.

2014 proved that Jennifer Lawrence has more genuine grace and character than almost any of us.

She also lumps Lawrence in as the modern equivalent to these women, but despite Petersen’s assertion that Lawrence’s popularity is due mostly to the fact that she comes off as “one of the guys,” 2014 proved that Lawrence has more genuine grace and character than almost any of us. It doesn’t take courage to talk about how much you love cheeseburgers, but it does takes courage to stand up against the onslaught of sexism that Hollywood actresses are forced to deal with just by doing their job and being in the public eye. And by doing that, Lawrence has already proved she’s much more than a “cool girl.”

But there are other ways that Hollywood’s most powerful women are taking back their own narratives, too. Scarlett Johansson has called out the ingrained sexism present in stupid interview questions. Jessica Chastain recently has pleaded for increased diversity in Hollywood following the controversy stemming from the Selma Oscar snubs. And Viola Davis’ speech at this year’s People’s Choice Awards, wherein she responded to a controversial New York Times article, by insisting that, yes, she is a “classic beauty,” showed that plain old self-confidence can be as revolutionary as anything in an otherwise unfair system.

The other essential element here is that even when women like Kaley Cuoco-Sweeting and Shailene Woodley shy away from the feminist label, it matters, simply because (whether or not we agree with them) their opinions on the subject are being debated and heard in a way they never were before. The ongoing battle for equality in the entertainment industry has been hard-fought, and as more people start to talk about what feminism means, and entertainers like Taylor Swift and Katy Perry continue to redefine their understanding of the concept, the closer we are to seeing a real conversation about gender become an active part of the mainstream.

The timing here is fundamentally key. The rise of feminism in Hollywood has coincided with the rise of feminism on the Internet, and that’s no coincidence. Following Time magazine’s ludicrous poll that suggested we should ban the word feminist altogether, The Week’s Elissa Strauss wrote that it “turns out feminism is not immune to the perils of popularity.” She continued, “The movement has become a media darling, rivaling Kim Kardashian for references in headlines and celebrity gossip. Fly that high and a backlash is inevitable… What interests me however isn’t how Time misstepped, but what, beyond misogyny, is fueling this backlash. Think of it as a teachable moment.”

With the amount of work left to be done, we are talking about baby steps here. This holds true both in Hollywood, where actors like Russell Crowe continue to offer opinions on topics which they know nothing about, and on the Internet, where spaces occupied by women continue to be grotesquely hazardous. However, even the baby steps spark bigger leaps. While Aniston also speaks out about the gender pay gap and culture of sexism in Hollywood, Charlize Theron fought the system and won, negotiating equal pay on her upcoming film, The Huntsman.

While feminism’s growing relationship with celebrity will continue to spark debate, it’s hard not to feel like the tide is turning. As women like Jennifer Aniston continue to shut down the media’s “petty B.S.,” it will inspire other women to speak up and be heard, rather than let others define them. It’s not exactly as if Aniston quashing a rumored beef with Angelina Jolie and telling everyone to mind their own business is a reason to throw a parade, but it’s an important start.