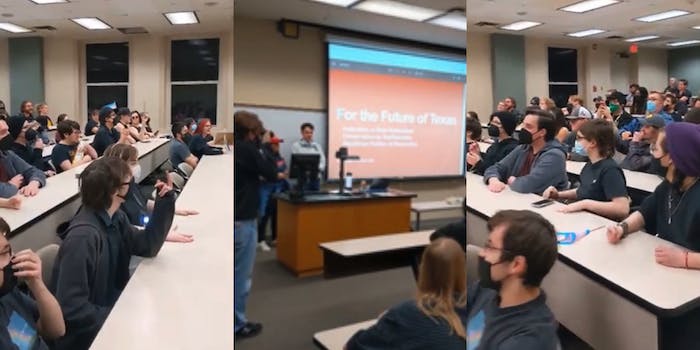 Texas GOP candidate Jeff Younger was heckled by protesters due to his anti-trans policies.

After Texas Gov. Greg Abbott (R) called for parents of transgender children to be investigated by child protective services, he was met with a wave of shock and backlash. Widely characterized as dangerous and transphobic, the directive’s opponents range from President Joe Biden and the ACLU, to everyday Texans.

One such protest went viral this week, showing a class of Texas students shouting down local GOP candidate Jeff Younger.

The video came from a (now-deleed) Twitter liveblog of a Young Conservatives event at the University of Texas, where Younger was scheduled to speak. While several conservatives did show up to support Younger, they were massively outnumbered by trans rights protesters. When the Texas House candidate stood up to speak, he was drowned out by a chant of “F*ck these fascists.”

Tweets from the event described a tense atmosphere, with Younger accusing the protesters of being “Russians” and “communists,” and making transphobic remarks. Meanwhile, the protesters heckled him with cries of “deadbeat dad,” asking about his child support status.

Younger has a very personal stake in the GOP’s opposition to trans rights, due to a high-profile custody battle over his twin children, one of whom is trans. Younger staunchly opposed his daughter’s transition, which he described as “child abuse,” whereas his ex-wife supported the child’s identity, helping her transition socially at school. After a judge granted most parental rights to Younger’s ex-wife, Younger then channeled his energy into running for office on an aggressively anti-trans platform, drawing support from the far-right.

This legal battle turned Younger into a cause célèbre for the anti-trans lobby, acting as a precursor to Gov. Abbott’s directive against transgender children. It’s no surprise that this Young Conservatives event attracted a crowd of protesters. And while the original “f*** these fascists” video was deleted by its creator, it’s now spreading fast elsewhere, with most commenters voicing their support for the protesters.